Buzz Aldrin: The President Who Colonizes Mars Leaves a ‘Legacy for Thousands of Years’

Buzz Aldrin: The President Who Colonizes Mars Leaves a ‘Legacy for Thousands of Years’ 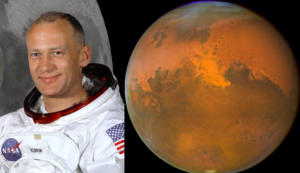 As one of the first men to walk on the moon, it might not come as a surprise that Buzz Aldrin is keenly interested in the future of space exploration. Aldrin gave an interview with IFLScience yesterday about his new book, where his theme seems to emulate that of the popular Matt Damon film, The Martian.

“We will colonize Mars,” Aldrin declared. “I wrote this book to inspire the young people, because they will be the ones who will carry out these missions to Mars, perhaps participating in them.”

Welcome to Mars: Making a Home on the Red Planet is a children’s book where Aldrin challenges readers to become scientific pioneers with the nerve and determination to create settlements on new worlds. During the interview, Aldrin said that Mars’ colonization was the next logical step for international human legacy efforts in space, and that his book pointed towards the positives of that goal.

While the discovery of liquid water and other enterprise efforts have made recent steps towards human interaction with the planet, Aldrin noted the difficult logistics in sending astronauts on a permanent exile to create a habitable outpost. Nonetheless, he responded that further scientific advancement by 2039 will allow for round trips, and that the U.S government and other organizations have a responsibility to inspire children with the optimism to face the challenge.

Think of history. Think of the opportunities that exist for young people in the future to become historic pioneers. Pilgrims on the Mayflower didn’t make it around Plymouth Rock for the return trip, they came here to settle America. And a lot of them lost their lives, but they pioneered what we have today.

Aldrin concluded that the feat could be done, and that, as far as America is concerned, the first government to place men on Mars would become legendary throughout history.

“The legacy of the president who makes the commitment will be far beyond his term,” Aldrin said. “He doesn’t have to be around, his name will still be around, it’ll have the legacy for thousands of years.”