BuzzFeed’s Week In Review: The Most Viral Stories Of The Last Week 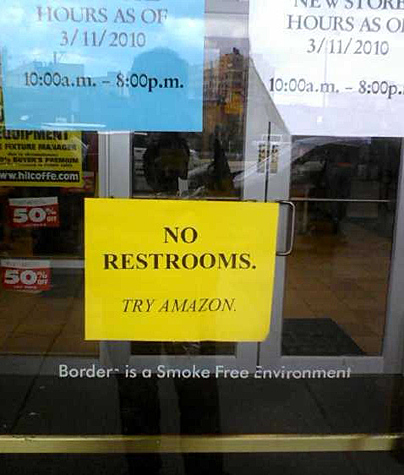 Thanks to our friends at BuzzFeed, here’s a run down of all the funniest, weirdest, most disturbing, and all around best viral stories of the past week!

Borders Books recently filed for bankruptcy and has been closing down stores across the country. In effect, passive aggressive signage and product displays are popping up all over the place.

Tuesday marked the 50th anniversary of the day that Russian cosmonaut Yuri Gagarin became the first person in space. While he was famously quoted for saying the Russian equivalent of “off we go” just before lift-off, his final preflight words were actually a bit of dialog about sausage and moonshine.

American Idol contestant Pia Toscano was eliminated last week to the outrage of fans, but the 22-year-old Howard Beach native landed on her feet, securing a recording contract with Interscope. To top it off, Pia Toscano was the second fastest rising Google Search of the week, reaffirming her “household name” status.

Multi-faceted comb-over Donald Trump has retained his position as a hot news item this week, continuing to beat the tired birther drum that even Bill O’Reilly and Sarah Palin are now refuting. In fact, it’s his own brazen ignorance of civcs that’s driving eyeballs to his press mentions.

Actor Steve Buscemi has long been famous for his signature world-weary looks. But in the last week Reddit and Tumblr users have taken to pasting his eyes onto Lady Gaga, Nicki Minaj, and more, in the week’s most bizarre trend: Chicks With Steve Buscemeyes. The effect is as entrancing as it is unsettling.

Eyebrow grooming has seen some interesting changes in recent years. The thin, plucked standards of the late 90s and early 2000s have relaxed a bit, allowing for bushier brows to be a bit more acceptable. But along the way there have been those adventurous souls who’ve tried out all sorts of styles, from drawing them on, dying them green, even tattooing.

Finally, the sixth series of the wildly successful British sci fi program Doctor Who is set to launch on April 23rd and Time Lord fandomonium is thick in the air. BuzzFeed’s own Jack Shepherd caught up with the cast to see what happens when seasoned English thespians read tweets from the likes of Snooki and Ghostface Killah.