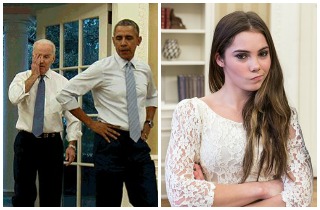 With the elusive deadline to enroll in the Affordable Care Act reportedly nearing, pending the whimsy of the Obama administration, ACA supporters in the White House are scrambling to enroll as many young, healthy individuals into the insurance exchanges as possible in order to ensure that they remain actuarially sound.

In pursuit of that project, the president and his team have taken their pitch to every venue where their sophisticated demographic research suggests the young people are; Funny or Die, professional sports programs, and Ryan Seacrest’s radio program, to name just a few.

The latest site in which the White House has decided to drag the tired appeal to purchase health insurance is BuzzFeed. There, the representatives of the leader of the free world transformed themselves into community contributors slash insurance salesmen. The post consists of a variety of .gifs of Vice President Joe Biden performing menial tasks. The message couldn’t be any clearer: get covered.

“Because it could literally save your life,” the White House warned. The gravity of that message might be slightly undercut, however, by fact that it was delivered in the form of a listicle featuring Biden making funny faces.

I give this BuzzFeed post by the White House a B http://t.co/irccm8Occq

Um not sure this is going to do the trick. How about that sit-down interview @vp? http://t.co/TIBCGCKznm

[Photo via The White House/Pete Souza]