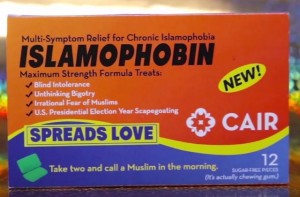 For years the Council on American-Islamic Relations (CAIR) has been challenging the anti-Muslim hate spewed by the likes of Donald Trump, Pam Geller, and Frank Gaffney by taking an earnest, serious approach to the issue grounded on facts. (Not that the bigots care about facts.) But now CAIR is trying a new weapon: comedy.

That’s why on Wednesday, CAIR’s national office unveiled a humorous approach to counter anti-Muslim bigotry centered on the product they created named “ISLAMOPHOBIN.” Think an anti-anxiety drug designed for people freaked out at the slightest sight or mention of Muslims. (That’s basically about 70 percent of GOP primary voters.)

The product comically offers “multi-symptom relief for chronic Islamophobia.” And ISLAMOPHOBIN promises that it will treat various symptoms such as an “Irrational Fear of Muslims,” “Blind Intolerance” and “U.S. Presidential Election Year Scapegoating.” (We need to get Trump a box of this product stat!)

CAIR even created a one-minute commercial parody for the product that you can check out below:

The commercial opens with the question: “Do you think your neighbor is a terrorist?” We then see a young white guy looking at his Muslim neighbor, who is simply gardening. All of sudden the white guy sees his neighbor as an ISIS-type figure yelling, “Allah Akbar.” We also see other examples of people freaking over everyday Muslim Americans. But then they take ISLAMOPHOBIN and voila! They then see the Muslims for what they are: typical Americans just living their lives.

As CAIR’s Ibrahim Hooper explained, “We hope that humor can help create public awareness about the rising level of anti-Muslim bigotry in our nation that has unfortunately been mainstreamed by public figures like Donald Trump, Ben Carson and others.”

Of course the obvious question is: can CAIR’s comedic campaign actually reduce the hate? Only time will tell. But I’m a big believer that comedy can reach people who would never watch a serious discussion on the issue.

And what I can also tell you from my own experiences is that the anti-Muslim bigots really hate having people laugh at their own campaign of hate. I witnessed this first hand with the comedy documentary I co-directed with Negin Farsad titled The Muslims Are Coming! that used stand-up comedians to counter anti-Muslim hate.

The anti-Muslim peeps like Pam Geller went ballistic over this, penning articles claiming we were waging a “stealth jihad” through comedy. (I’m not kidding!) I guess to them our movie was about “Imposing sharia law – one joke at a time.”

For the record, neither I nor any Muslim American I know wants to impose Islamic law in America. But as we have seen recently in states like Mississippi, North Carolina, and Oklahoma, many conservative Christian Republicans want to impose Christian sharia law to control women and punish the LGBT community because they believe it’s mandated by the Bible.

CAIR’s new project will likely be applauded by many as a clever approach to the growing problem of Islamophobia. While others on the right will be angry. (I know, saying the right is angry is redundant.) And of course they will angrily say things like: “ISIS is killing people and you are being funny!!”

ISIS is a despicable death cult that needs to be destroyed. And while this is often forgotten in the mainstream media’s coverage, the number one victim of ISIS by far are other Muslims.

The focus of CAIR’s campaign is obviously not to discount the threat of ISIS. Rather it’s to counter the hate being directed against Muslim Americans simply because of their faith. In fact, we have recently seen an alarming spike in Muslim American students being bullied in schools.

As Hooper noted, the hope is that this comedic campaign will reach Americans “who reject the intolerance being exploited and promoted in the current partisan political atmosphere.”

Do I think this comedic approach will change the mind of the leading anti-Muslim bigots? No. That would be like asking if a funny video could change the mindset of the Trump supporters who have been spewing vile anti-Semitic attacks against Jewish reporters who have dared to criticize their beloved leader. Some people have marinated in hate too long to change their views.

But I do believe this helps to chip away at the misconceptions that many hold about Muslims. Here’s hoping that CAIR’s new effort both counters the hate and pisses off the anti-Muslim bigots. That truly would be a win–win scenario.