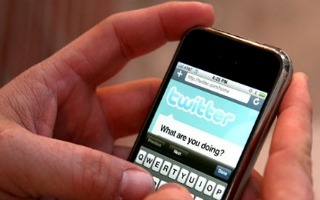 An arts theater in Minneapolis, Minnesota has capitalized on the growing trend of American’s inability to pay attention to anything for long periods of time. Can’t sit through a full act without checking your social media? No problem! Try The Guthrie Theater’s new “Tweet seats” where you can post on Twitter to your attention deficit heart’s content!

Audience members are “encouraged” to post comments about the live performance, according to The Daily Mail, in a balcony section that’s roped off specifically for Tweeters. Management says it “will not be disruptive to other patrons” who actually can focus for longer than two minutes without their social media.

The Guthrie isn’t alone in embracing Tweeters: The Palm Beach Opera in Florida and the Public Theater in New York are among arts institutions experimenting with the idea of allowing patrons to Tweet during live shows.

Theaters may have realized they can’t fight these social media addicts, so they’ve instead created a special place for them, where the bright lights of iPhones and Androids won’t bother other customers. Executives at The Guthrie believe social media could even enrich the experience of seeing a live play. External Relations Director Trish Santini said,

“If there were ever a Guthrie show to host Tweet Seats, it’s The Servant of Two Masters. This cast is an incredible ensemble of comedians, and night after night they’re riffing and improvising-it’s the kind of show that makes you ask, ‘Did they just say that?’ Usually they did – and tweeting should be a great way to talk about it.”

Maybe, but will Tweeting about shows actually add anything to the discussion? Peter Funt of the New York Times doesn’t think so: “According to actual postings during a concert featuring works of Mozart, furnished by the Cincinnati Symphony, withak53 wrote: “Music hall looks a lot prettier from the top balcony.”