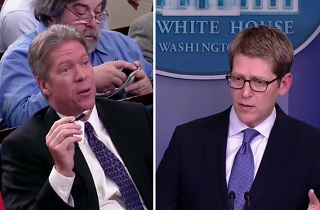 After President Obama‘s recitation of the Gettysburg Address for documentarian Ken Burns ignited a firestorm among conservatives, but before the matter had been definitively laid to rest, CBS News’ Major Garrett asked White House Press Secretary Jay Carney to explain the President’s selection of a draft that did not include the phrase “under God.”

As the rest of the internet would soon learn, Carney explained why the President’s recitation of the speech did not include the phrase “under God,” which turned out not to be an “omission.”

“Now, you may not know the answer to this, but I want to bring this up to you,” Garrett began. “I know you know this, but the President is one of 61 famous politicians, historians and others who have cited the Gettysburg Address for Ken Burns.”

“Now, there are two copies of that Gettysburg Address,” he continued. “One is called the Nicolay and one is called the Hay, and both are in the Library of Congress. Neither of them include ‘under God,’ which is the way the President read it. Many others included a reference to God in the Gettysburg Address. I’m just curious if you know why the President read it that way?”

The Burns site contains a link to information about the five existing copies of the speech, and notes that three of them “were written by Lincoln for charitable purposes well after the Nov. 19, 1863, event.”

” I think he read the version of the address that Ken Burns provided,” Carney replied. “I think Ken Burns is a noted Civil War scholar.”

“Ken Burns provided it to him?” Garrett confirmed.

The Ken Burns site also contains a notation which reads “Did you know there are five versions of the Gettysburg Address? We asked President Obama to read the first, the ‘Nicolay Version.'”