Caught In The Storm: What #Sharknado’s Ratings Bust Says About How We Consume Media—Or Don’t
Column

Caught In The Storm: What #Sharknado’s Ratings Bust Says About How We Consume Media—Or Don’t 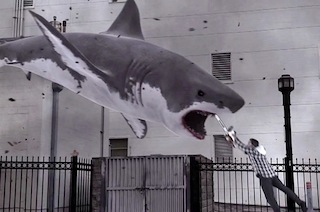 In case you needed reminding that Twitter is not the same as real life, look no further than the wide gap between the frenzy Sharknado caused on the social media network and its balmy, actual ratings.

Syfy’s latest B movie spectacle—in which a tornado approaching Los Angeles picks up and hurls Great Whites at Angelenos leaving Dodger Stadium in the fifth inning—went hyper-viral over the past two days, with some estimates clocking 5,000 tweets per minute about the film. Journalists, celebrities, and politicians rushed to log their best Sharknado pun. Kathleen Sibelius got in on it. It got itself folded into the Texas Senate’s late-night abortion debate (#SHARKPON!). It reached so wide it even managed to include Philip Roth—Philip Roth! And then there were the meta-tweets: 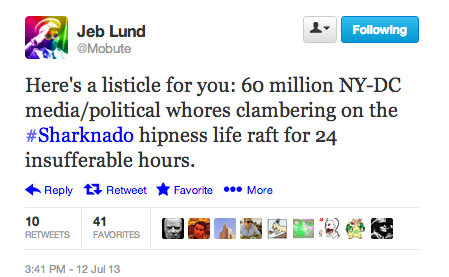 All that attention would make you think the actual movie, which aired Thursday night, would be a hit. Actually, it did no better or worse than Syfy’s usual Thursday night fare, a mild slice of the big cable pie, easily beaten by ho-hum network shows. It doesn’t appear that Snarknado’s intense Twitter dominance convinced a single person to actually watch the movie.

This is not the first time social media has misled executives into thinking they have a hit on their hands. Snakes On A Plane—a movie that so roiled the internet that changes were made post-production in response to online input—bombed at the box office, despite months of breathless but virtual anticipation.

What’s the deal? Well, the young, irony-fueled set that makes up much of the social media universe (hi!) loves two things more than anything else: animals doing wacky stuff, and snark. Combine those, and you’ve got yourself a viral sensation in 140-character bursts. Recall: that red panda had been missing from Washington D.C.’s National Zoo for barely an hour before it had its own Twitter handle and was complaining about the D.C. Metro.

Sharknado and Snakes On A Plane were made as movies, but Twitter liked them better as prompts. The medium’s self-sustaining, incremental world is perfect for elaboration, verbal filigrees, associations, references. That Sharknado was absurd was all the better; it’s mere presence in a tweet, as a word or a concept, had value, and the more you could combine it with serious events—climate change, say—the better the joke: 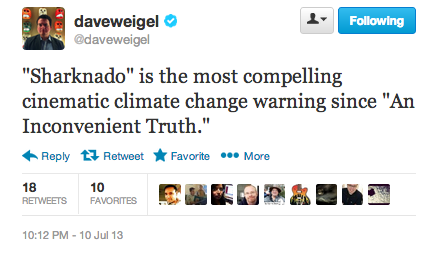 But the same shallow goofiness that made it such a portable gag also meant it had little interest as a work in and of itself. Sharknado was so great because you didn’t need to see it to make fun of it, or use it to make fun of everything else. You needn’t bother about its plot peripities or moral complications. If it had those, it wouldn’t be called Sharknado.

In this way, what the feeding frenzy over Sharknado most resembles is not Snakes On A Plane but another shallow sensation: Fifty Shades Of Gray. The S&M-lite trilogy sold so many copies it single-handedly sustained Barnes & Noble through an otherwise disastrous quarter last year. But according to a recent release by Goodreads, which can track when people stop reading books and abstract from the data, Fifty Shades was one of the top five abandoned books on the site, making it perhaps the best-selling unread book of the modern era.

If all this doesn’t argue for a different standard of success—Fifty Shades did earn a kajillion dollars, so more power to it—it should at least make us skeptical of assigning any actual worth to the random artifacts of culture that get launched over their tipping point. What good is a movie that gets tweeted but not watched, or a book that gets bought but not read? The next time you see a hashtag light up Twitter, or a book dangling from the hand of every soul on the subway platform, and feel the urge to join in, ask yourself: is it everywhere because it’s good, or merely because people are caught up in the storm?