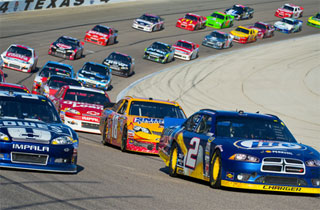 (UPDATED BELOW) For the past few years, NASCAR has held its annual Camping World Truck Series Awards Banquet at the Trump National Doral Golf Club Hotel in Miami. But with all the controversy surrounding Donald Trump, the CEO of Camping World––the title sponsor of NASCAR’s truck racing series––doesn’t want that to happen again.

According to USA Today, Marcus Lemonis sent a letter this week to NASCAR CEO Brian France saying that if they hold the awards ceremony at Trump’s resort again, he won’t be attending.

He wrote, “Our company will not stand to support any person or organization that associates with such beliefs and we feel strongly about distancing ourselves from any negative and discriminatory comments made against any gender, ethnicity, age group or so forth.”

And Lemonis added, “I would hope that the entire NASCAR organization would agree with my sentiments.”

Trump’s comments about Mexican immigrant rapists and criminals got him into a lot of hot water in the past few weeks, kicking off with Univision pulling out of Miss USA. Trump had responded early on by saying all Univision employees are banned from Trump National Doral.

UPDATE- 5:47 pm EST: Well, that didn’t take long. After Lemonis’ letter was publicly reported, a NASCAR spokesperson said, “We looked at everything we saw coming down and what we heard from our sponsors and our partners and what we feel we should be doing, and that’s what led us to the decision today.”

So yes, they won’t be holding the awards ceremony at Trump’s resort.