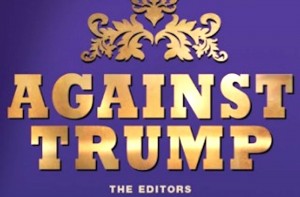 National Review‘s massive anti-Donald Trump manifesto dropped tonight, and it contains the magazine’s editors and 22 prominent conservatives trashing Trump as a brash faux conservative every possible way you can think of.

A lot of these writers are pretty much in agreement that Trump is a faux conservative. Brent Bozell, founder of the Media Research Center (which owns the conservative media watchdog), writes this:

Virtually every Republican presenting himself to voters swears so-help-me-God that he is a conservative. Many of these politicians are calculating, cynical charlatans, running as one thing only to govern in a completely different direction…

Enter Donald Trump, not just with policy prescriptions that challenge the cynical GOP leadership but with an attitude of disdain for that leadership—precisely in line with the sentiment of the base. Many conservatives are relishing this, but ah, the rub. Trump might be the greatest charlatan of them all.

Glenn Beck said that when principled conservatives fought the Obama administration, Trump was instead on the same side as liberals. Mona Charen said he’s been donating to liberal causes for years, and Dana Loesch was amazed by the kind of backlash conservatives get for daring to call out Trump’s not-so-conservative positions.

And then there’s all the jabs at Trump’s ego:

Trump has made a career out of egotism, while conservatism implies a certain modesty about government. The two cannot mix. – Mona Charen

Forget even his raging egomania, matched only by Obama’s, which the president sometimes tries to conceal beneath a laughably transparent gossamer of false modesty. – Mark Helprin

In any integrated personality, the id is supposed to be balanced by an ego and a superego—by a sense of self that gravitates toward behaving in a mature and responsible way when it comes to serious matters, and, failing that, has a sense of shame about transgressing norms and common decencies. Trump is an unbalanced force. – John Podhoretz

What is even more remarkable is that, after seven years of repeated disasters, both domestically and internationally, under a glib egomaniac in the White House, so many potential voters are turning to another glib egomaniac to be his successor. – Thomas Sowell

And, of course, some of these writers are a little terrified by Trump’s ignorance about big issues, especially on foreign policy:

He doesn’t know the Constitution, history, law, political philosophy, nuclear strategy, diplomacy, defense, economics beyond real estate, or even, despite his low-level-mafioso comportment, how ordinary people live. But trumping all this is a greater flaw presented as his chief strength. – Mark Helprin

Donald Trump does not have a clue about any of this, careening wildly from vows to stay out of the fray (leaving it in Vladimir Putin’s nefarious hands) to promises that the earth will be indiscriminately scorched. The threat against us has metastasized in our eighth year under a president who quite consciously appeases the enemy. But the remedy is not a president oblivious of the enemy. – Andrew McCarthy

[A] Donald Trump presidency would imperil our national security… We remain the world’s strongest power and can recover; but to inspire the respect that creates fear and trust when and where each is necessary, we will need a president who summons our strength with a reality-based strategic vision, not one who summons applause with tantrums and homicidal fantasies. – Michael Mukasey

His public pronouncements over the last few decades give no evidence of consistent or coherent political views. By comparison, Hillary Clinton is a principled public figure. – R.R. Reno

One of the contributors to the manifesto is Edwin Meese, who served for years under Ronald Reagan when he was a governor and then the president. And he wants to make it clear that no matter how much Trump might want to argue the point, he is no Reagan:

There are two tactical approaches for candidates seeking their party’s nomination in election campaigns. One is to strongly debate the issues and firmly advocate your positions, but to avoid personal attacks on your opponents or needless divisiveness. The other is to vigorously attack your fellow candidates, disparaging them personally and seeking to raise yourself up by dragging them down.

Ronald Reagan was famous for epitomizing the former path. Donald Trump, unfortunately, has chosen to follow the latter course.

Evangelical leader Russell Moore brings up the moral argument about Trump and what exactly his values are:

One may say that Trump’s personal life and business dealings are irrelevant to his candidacy, but conservatives have argued for generations that virtue matters, in the citizenry and in the nation’s leaders. Can conservatives really believe that, if elected, Trump would care about protecting the family’s place in society when his own life is—unapologetically—what conservatives used to recognize as decadent?…

Trump can win only in the sort of celebrity-focused mobocracy that Neil Postman warned us about years ago, in which sound moral judgments are displaced by a narcissistic pursuit of power combined with promises of “winning” for the masses.

A few of these writers do give Trump some due. Erick Erickson says at the outset he would vote for Trump over Hillary Clinton any day, and David McIntosh credits him for recognizing the failures of the government and using them to his advantage. But they still pretty strongly rip into him as someone who doesn’t deserve to carry the conservative mantle.

And just to top it all off, Katie Pavlich throws some shade at Trump’s conservative defenders who, like many of the other writers, she thinks are abandoning their principles:

The rabid defense he gets from some quarters is astonishing. Trump’s liberal positions aren’t in the distant past—he has openly promoted them on the campaign trail. Trump isn’t fighting for anyone but himself, which has been his pattern for decades.

Conservatives have a serious decision. Do we truly believe in our long-held principles and insist that politicians have records demonstrating fealty to them? Or are we willing to throw these principles away because an entertainer who has been a liberal Democrat for decades simply says some of the right things?

In short, do our principles still matter? A vote for Trump indicates the answer is “No.”

And just to top it all off, National Review‘s own editors put out, separately, an editorial declaring that if Trump is the GOP nominee, the conservative movement “would have fallen in behind a huckster.” They declare Trump to be a “menace to American conservatism.”

You can read the full manifesto here.