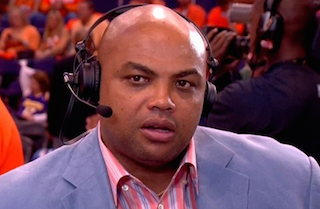 Shortly after the Ferguson grand jury decision was announced last week, Charles Barkley went on Philadelphia’s 97.5 Fanatic radio station with host Mike Missanelli, where he shared his reaction to the decision not to indict Officer Darren Wilson in the shooting death of Michael Brown. And just as he has done in the past, the NBA all-star did not censor himself.

“The true story came out from the grand jury testimony,” Barkley said, indicating that he believes Wilson’s version of the events and that the shooting was ultimately justified. “We have to be really careful with the cops man, because if it wasn’t for the cops we would be living in the Wild, Wild West in our neighborhoods,” he continued. “We can’t pick out certain incidentals that don’t go our way and act like the cops are all bad.”

“Do you know how bad some of these neighborhoods would be if it wasn’t for the cops?” Barkley asked.

“I can’t believe anything I hear on television anymore,” Barkley said later. “That’s why I don’t like talking about race issues with the media, because they love this stuff.”

“They don’t jump to conclusions when black people kill each other,” he added. Echoing some prominent conservative pundits, Barkley noted that the media doesn’t go “crazy” over the “epidemic” of black-on-black crime.

“There is no excuse for those people to be out there burning down people’s businesses, burning up police cars,” Barkley concluded. “That serves no purpose whatsoever.”

Listen to Barkley’s full comments about Ferguson below, via WPEN: