Charles Krauthammer Advises GOP: ‘Don’t Force The Issue When You Don’t Have The Power’

Charles Krauthammer Advises GOP: ‘Don’t Force The Issue When You Don’t Have The Power’ 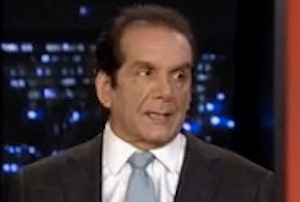 In a new column in the Washington Post, Charles Krauthammer — as many have done since the election — offered some words of advice to the Republican Party. Pointing to the conventional wisdom that the GOP is internally divided, Krauthammer offered that the party’s problem is entirely solvable.

This is true, he said, because…

Imagine that we had a Republican president. Would the party be deeply divided over policy, at war with itself in Congress? Not at all. It would be rallying around something like the Paul Ryan budget that twice passed the House with near 100 percent GOP unanimity.

The party does have a broad consensus when it comes to stances on issues, he argued, but what the GOP does not have is power.

Turning to the fiscal cliff and the debt ceiling debate, Krauthammer noted that one portion of the party has been striving to govern from one house of Congress. He, himself, however, put forth a somewhat resigned perspective.

“Obama’s postelection arrogance and intransigence can put you in a fighting mood. I sympathize,” he wrote. “But I’m tending toward the realist view: Don’t force the issue when you don’t have the power.”

Speaking to the debt ceiling specifically, Krauthammer said it’s evident that the GOP won’t get what they want and will have to “cave” in the end. So instead, adhere to a rule: “From a single house of Congress you can resist but you cannot impose.”

And then, look to the future:

Want to save the Republic? Win the next election. Don’t immolate yourself trying to save liberalism from itself. If your conservative philosophy is indeed right, winning will come.