Chechen President Blames U.S. Upbringing For Boston Suspects’ Acts: ‘Look For The Roots Of Their Evil In America’

Chechen president Ramzan Kadyrov has delivered an official statement on the two Boston Marathon bombing suspects who originally hail from the Russian republic of Chechnya. The 36-year-old Kadyrov, who has been the leader of the Chechen people since 2007, expressed his “condolences” for the victims of the attacks, but insisted that “any attempts to link Chechnya” and the suspects, “if indeed they are guilty, are futile.” He declared, “It is necessary to seek the roots of their evil in America.”

Kadyrov posted his statement on Instagram, of all places, along with a photo of himself. The original post in Russian, along with the English translation, via Quartz, can be found below. 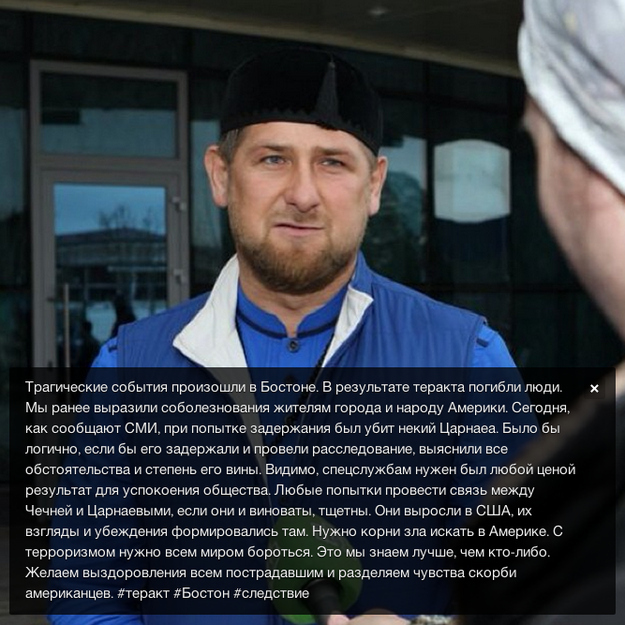 The events that took place in Boston are tragic. People have been killed as a result of a terrorist act. Earlier we expressed our condolences to the residents of the city and to the American people. Today, according to media reports, during an arrest attempt a certain Tsarnaev was killed. It would have made sense to arrest him and carry out an investigation, clarify all the circumstances and his degree of guilt. Evidently, the security services needed a result at any price in order to calm the populace. Any attempts to link Chechnya and the Tsarnaevs, if indeed they are guilty, are futile. They grew up in the USA, their viewpoints and beliefs were formed there. You must look for the roots of [their] evil in America. Terrorism must be fought everywhere. We know this better than anyone. We wish all the victims a [speedy] recovery and share in Americans’ grief. #terroristact #Boston #consequence