‘Child Molesters?’: Yes, Bernie Sanders Has Had Negative Ads Run Against Him 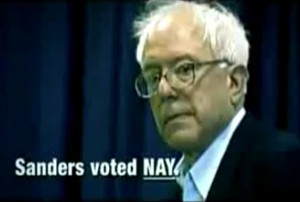 On Sunday morning’s Meet the Press, Hillary Clinton challenged Bernie Sanders‘ various polling leads against Donald Trump by making the observation that he has not been attacked on the national stage the way she has over a 25 year period, adding that “I don’t think he’s ever had a single negative ad run against him.”

While Hillary is right that Sanders hasn’t suffered that type of onslaught on a national level, and hasn’t had much in the way of attacks leveled at him in this election, Bernie actually did have some pretty despicable negative ads run against him during his 2006 senate campaign against Republican Richard Tarrant. The most unsubtle of them goes after Bernie on his apparent support for child molesters. No, I’m not effing kidding you:

Child molesters? Prison is where they should be!

The way that ad is worded, you don’t really even have to fact check it to know where the BS is. It’s an old trick where you take a perfectly reasonable position like opposing mandatory minimums, and apply it to the bogeyman of your choice. Tarrant also attacked Bernie for voting against a large crime bill that included mandatory minimums and the Amber Alert system, because obviously Bernie is in the pocket of Big Kidnapper.

Sanders’s campaign released a pithy response to Tarrant’s attacks that knocked them all down in fairly short order:

So yes, Bernie has had absurd and hamfisted attack ads run against him in Vermont, for what that’s worth. At least if he wins the nomination, he won’t have to worry about Donald Trump stooping to that “child molester” thing, right?