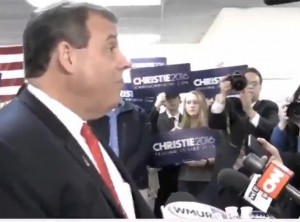 Whether it’s Marco Rubio or President Obama, New Jersey Governor and Republican presidential hopeful Chris Christie just can’t seem to stop calling certain political figures “boy.” On Tuesday, Christie followed up his blip of a showing in the Iowa caucuses by deriding triumphant bronze medalist Rubio in what he must have thought was the cleverest way imaginable. Either that, or an old gypsy told him that every time he said a certain phrase, he’d gain a point in the New Hampshire polls. See if you can guess what that phrase was:

You know why? Because I don’t think he can. I don’t think he wants to sit here and answer your tough questions about his flip-flops on immigration, he wants to answer your tough questions about his lack of record and inexperience, he wants to answer your questions about why he ran away from his own immigration bill when it got too hot, I’m fascinated to hear the answers and I’m sure you will be too. And maybe he’ll answer more than two or three questions at a town hall meeting and do more than 40 minutes on a little stage telling everybody his canned speech that he’s memorized over the course of his time. This isn’t the student council election, everybody. This is an election for the president of the United States. Let’s get the boy in the bubble out of the bubble and let’s see him play for the next week in New Hampshire. I’m ready to play.

Do you get the feeling Chris Christie was left alone one weekend as a child, with only a single John Travolta videocassette to keep him company? Or maybe he just really didn’t like the look of the real boy in the bubble, who died when he was 12 years old.

Rubio was asked about the remark, and fired back at Christie like a defective Super-Soaker:

He’s had a — I think it’s been a tough couple of days for Chris and some of the other guys. They’re not doing well. Some people react badly sometimes to adversity. Look, this campaign isn’t about personal insults. If they want to do that, that’s fine. It will reflect on them, not on me.

Weak, Marco. I’m from Jersey, so let me help you out.

“Hey, I might be the boy in the bubble, but this f*ckin’ guy is the bubble!”

“Well, at least the lap band worked on his poll numbers!”

“Let’s see how many lanes he can close in New Hampshire, gah-BEESH?”