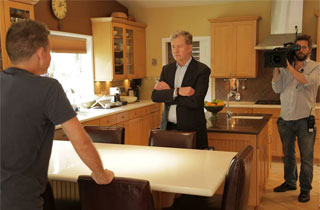 For anyone who watched television in the mid-2000’s, there was nothing quite like the schadenfreude one felt whenever they watched Chris Hansen catch online child predators on his recurring NBC Dateline special To Catch a Predator. The show may have ended, but seeing as we still have internet, it’s highly likely that there are still plenty of creepy dudes who use the internet to have sex with underage children.

That’s why Hansen is launching a Kickstarter tomorrow to bring a new version of To Catch a Predator online. All predators. All the time.

In an interview with the Los Angeles Times, Hansen said that fans had been clamoring for the show’s return after it went off the air in 2008, hinting that there was a strong enough demand for a Kickstarter to succeed. “There is a pent-up demand from viewers for another investigation,” Hansen said. “And from a technology standpoint, the landscape has really changed since we did the last one.”

“When we did it before, there were chat rooms on AOL and Yahoo,” he added. “Now there are 22 ways to communicate online.” (Oh god. Snapchat predators probably exist.)

Similar to the Reading Rainbow Kickstarter (but for a much ickier purpose), donors will get all sorts of sweet prizes for their contributions, ranging from t-shirts to private screenings to Hansen leaving personalized voice mail messages.

Hansen teased the upcoming campaign, which launches tomorrow, in the video below: