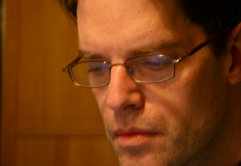 Last week Chris Lehmann, Bookforum editor and Managing Editor of Yahoo’s News Blog, announced the launch of  his new book, Rich People Things. The book was born out of his long-running column of the same name for The Awl, the popular blog run by former Gawker editors Alex Balk and Choire Sicha, which posts highbrow commentary and sometimes bear videos.

In February, Lehmann secured a book deal based on the columns, which examine the institutions of modern capitalism and a provide “glimpse into how the top one percent maintains an iron grip on almost half of America’s financial wealth.” Last week, Rich People Things became available for preorder, with the release date for preorders slated for September 15. Fans of Lehmann’s column have already been clamoring to order the book — if Lehmann’s columns are any indication, the book promises to be full of his signature mix of biting satire and sharp prose.

This week, I spoke to Lehmann about the book, the column, and the events that led him to write about so-called “Rich People Things” — and Lehmann also provided an excerpt of a chapter for Mediaite readers. 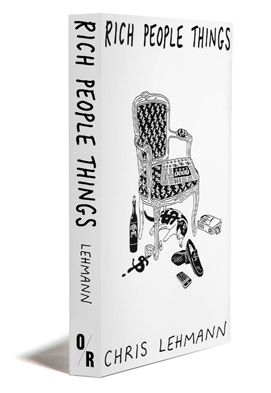 First: tell us a little bit about your book — how would you describe it?

I’d say it’s like a long and sensual walk on the beach with an extremely attractive soulmate. Or else a jaundiced look at a corrupt and wheezing money culture, steeped in denial and free-market propaganda. Take your pick, really.

I tried to keep certain long-ago books on similar themes in mind as I wrote—like Edmund Wilson’s collection of Depression reporting The American Jitters, and Thurman Arnold’s The Folklore of Capitalism. Not that I’d put myself anywhere near such distinguished company, mind you—but both those books sharply expressed the mixture of raw disbelief and restless curiosity about how events conspired to create a catastrophe on the scale of the Great Depression. I’ve seen all too little of that sensibility in reports on our own economic plight, so I’ve tried to revive it a bit, both in the online column for the Awl and in the book.

A curious note about Thurman Arnold, who was a bitterly cynical former antitrust official in the Roosevelt years: There’s an office building named for him now in downtown DC. I can’t tell which is stranger: That there was once a federal appointee who could write a scabrous attack on free-market pieties called The Folklore of Capitalism, or that his most visible legacy is an office building full of bankers and lobbyists toiling unknowingly in his name.

In your first column for the Awl, you talked about your experience working at New York magazine and particularly your reaction to  their “Rage of the Rich” issue in spring 2009. Can you tell us a bit about that experience at New York?

Hoo boy. Well, suffice it to say, after a lot of loose talk about “giving the New Yorker a run for its money” and “reviving long-form literary journalism” and whatnot during my interviews there, I was instantly tasked upon my arrival with overseeing the redesign of “The Strategist” shopping section and its metastasis from 6 or so to 24 or so pages in the magazine. There was also the agonizing meeting to determine the Platonic form of the New York Magazine Cover Story, and the consensus choice was a profile of bag-making ingénue Kate Spade. I blurted out in reply that I would flee the building before I would read such a thing. From then on, let’s just say it became clear to all concerned parties that my hire was less than an ideal fit.

And, what gave you the idea to start writing the Rich People Things column?

The aforementioned New York mag issue. Alex Balk and Choire Sicha had asked me to write for the Awl prior to its launch, but I wasn’t really intending to. (Hello, they still don’t pay contributors!) But I saw that NY mag package, and could imagine all too vividly the process by which it was conceived and executed, and when I resolved I couldn’t remain silent, I also knew that the Awl would probably be the only place to run such a thing. I had no intention of writing a column; Choire had given it the Rich People Things slug, which I believe was coined originally during his tenure at either Gawker or the New York Observer, when he posted that first entry. Alex asked me if I objected afterward, but I couldn’t think of any grounds to complain, partly because I didn’t really understand what the phrase was supposed to mean.

But as it happened, this was the spring of 2009, and the economic indignities just kept on coming. Someone else the following week forwarded me a link to really myopic piece in the Washington Post on Obama’s tax policy, and from then on, I realized this was actually one of the easiest columnizing gigs on the planet—and a good thing, too, since as I mentioned before, it DOESN’T PAY A GODDAMN THING.

You’ve described the book in the past as a “bestiary of the permanent institutions of American capitalism.” What institutions do you single out the most for analysis and why?

Well, I thought it would be good to use the column’s point of view to examine a lot of things that we take for granted as other-than-rich-people-things in our common life—like the Constitution, the Democratic party, the Supreme Court and whatnot. I also wanted to discuss a few things that were, in the stricter sense of the word, actual things—like the iPad, the art of Damien Hirst, and reality TV. The idea, I think, was to mix more somber historical and political features of economic life with the cultural forces that sustain our beliefs in meritocracy and the gospel of success. Also to keep the tone pretty arch and satirical, since our guiding economic dogmas are many things, but as the events of the past two-plus years or so have shown, they are really not all that rational.

In your columns you’ve referenced those who you call the “are nots.” How do you define this term, and who are you classifying as are-nots?

I think the phrase—which I cribbed from political scientist Marc Landy, if memory serves—invokes the idea that our incomes and wealth-holding don’t match up to our status anxieties. So, for instance, if a Tea Party protestor was absolutely convinced that the Obama stimulus plan was a tax increase—when it was in fact a tax CUT for anyone earning less than 250K a year, you sort of have to conclude that person is protesting something other than their slipping economic footing. What that is, I could only guess at—but it would seem to involve a sense of exclusion from the so-called elites who lay out the economic aims of the liberal state, the Red Army in the lamestream media, the coastal lords of the culture industries and what not. The complaint, near as I can suss out, is that there’s conspiracy afoot among these remote figures to deny, well, something to the overlooked people in the American mainstream. To the extent that something is their own status or sense of self-worth, I think it’s useful to characterize them as “are nots.”

Is any of the book from past Awl columns? How much is new material?

It’s mainly new material—85 percent or so, I’d guess–with some other published work I’ve done in non-Awl outlets also woven in. But since I’ve never really written a book before, I haven’t real mastered the art of repurposing old material in a new format.

Yep, it can be pre-ordered now—and the release date for pre-orders, for both the e-book and print version appears to be Sept. 15. This all has something to do with the bold new DIY business model at OR books, but it’s so bold and new that I don’t really grasp it. My editor, the delightful Colin Robinson, constantly tells me, though, that the volume of pre-orders will determine the eventual print run in October, so tell your readers to take pity on an poor old unpaid Awl columnist and pre-order the thing in droves.

>>>NEXT: Exclusive excerpt from Rich People Things, featuring New York Times columnist David Brooks! Click if you want to find out if it’s flattering or not.