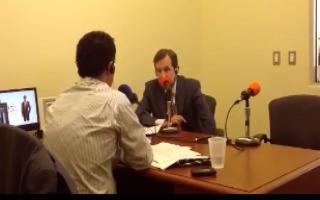 Appearing on Brian Kilmeade’s Fox News Radio program on Wednesday, Fox News Sunday host Chris Wallace was asked for his thoughts on comments made by FNC contributor Juan Williams on Tuesday night in which he expressed incredulity about the claims made by Ann Romney in her Republican National Convention speech. Williams said that Ann Romney did not convince that she had ever struggled and that she appeared to be a “corporate wife.” Wallace said that he found William’s comments to be “stupid.”

Kilmeade played the clip of Williams on a panel with Bret Baier on Tuesday night who, after listening to Ann Romney’s speech, said that she was unconvincing. Williams said he doubted that she truly understood the struggles of women and she appeared to be Mitt’s “corporate wife.”

“I was shocked by that,” said Kilmeade.

“I have to say, when I heard Juan say what he said, I thought ‘oh boy, is there going to be a reaction to that,’” said Wallace.

“One of the great things about Fox is people are free to say what they want,” Wallace continued. “There is no party line. Having said that – and I have respect for Juan – but I thought it was really a dumb remark.”

Wallace said he didn’t even truly understand the remark and that it is relatively common for married couples to care for one another. “It’s just silly, the idea that she’s been taken care of and coddled,” said Wallace. “This idea that she’s a coddled wife — I don’t know where it comes from.”