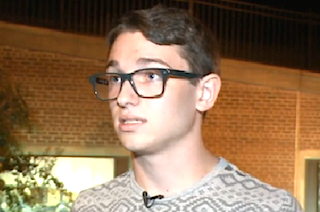 When 19-year-old Kennesaw, Georgia native Daniel Pierce came out to his father, step-mother and grandparents this week, they did not take the news well, to say the least. The young man decided to start filming the interaction with his family, which quickly turned verbally abusive and physically violent. The five minute video he shot on his phone and later posted to YouTube has spread wide and far over the last few days, reaching nearly 4 million views.

During the confrontation, Pierce’s family cities “the word of God” to explain why they believe his sexual orientation is wrong. His father calls him “queer” and a “disgrace” before his step-mother begins physically beating him. The teen was since kicked out of his house and is staying with a sympathetic aunt.

A GoFundMe.com page set up to help Pierce support himself after his parents cut him off financially started out with a goal of $2,000. In the last two days, more than 3,500 people have donated nearly $95,000.

In a note on the crowdfunding page, Pierce wrote:

I would like to the opportunity to thank each and everyone of you who has so generously donated. My intent is to pay if forward and hopefully turn something so negative into something positive. I will do my best to value the gift I have been given by so many of you. Thank you for your love and support.

If you would still like to make a donation please consider donating to Lost-N-Found Youth in Atlanta… they have been an amazing support and resource through this difficult time.

Pierce later appeared via phone on Dr. Drew, telling the host he “lived in fear of coming out” to his parents. Watch video below, via HLN: