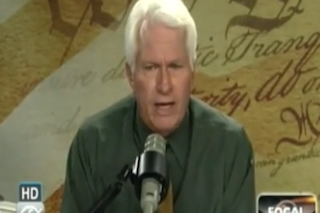 Brian Fischer, Director of Issues Analysis for the American Family Association and outspoken anti-gay activist, accused new Wyoming Senatorial candidate Liz Cheney of being soft on what he calls the issue of “sodomy-based marriage” because of her sodomy-based-married sister Mary.

Yesterday, Fischer denounced Cheney’s campaign, in which she’s challenging Republican incumbent and Dick Cheney shooting buddy Mike Enzi, because she’s not anti-gay enough, no matter how (neo)conservative she may be on a host of other issues. On Thursday he wondered if the entire Cheney line had been compromised on gay marriage thanks to Mary. (Cheney père’s conservative views make an exception for the support of gay marriage as well.)

“That complicates things for a lot of people if they have somebody in their family that is homosexual, they think they’re obligated then to support the homosexual agenda,” Fischer said. “Well, that’s just absurd. If you’ve got a bankrobber in the family, that doesn’t mean you automatically have to support bank robbing as a lifestyle choice. If you’ve got a drug dealer in the family, that doesn’t automatically mean that you’re going to support drug dealing as a profession.”

This is not the first time Fischer has compared homosexuality to bank robbing, or shoplifting, or drug dealing.

Incidentally, having a bankrobber in the family doesn’t always end poorly.