Christie Swipes at Rand Paul During RNC Meeting: ‘We’re Not a Debating Society’ 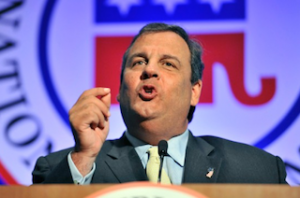 New Jersey Governor Chris Christie delivered a fiery speech to Republicans at the annual RNC Meeting in Boston Thursday, taking what appeared to be swipe at potential 2016 rival Sen. Rand Paul (R-KY) when he said, “We are not a debating society. We are a political operation that needs to win.”

Video cameras and press were barred from the room where Christie delivered his remarks, his first to an RNC meeting audience, but GOP officials in attendance did relay Christie’s message to CNN and other sources. “I am in this business to win,” Christie said to the RNC luncheon. “I don’t know why you are in it. I am in this to win.”

And Paul wasn’t the only Republican who drew criticism from Christie. The governor also took a thinly-veiled shot at Louisiana Gov. Bobby Jindal, who said in January that the GOP needs to “stop being the stupid party.”

“I’m not going to be one of these people who goes around and calls our party stupid,” Christie said. “We need to stop navel gazing. There’s nothing wrong with our principles. We need to focus on winning again. There’s too much at stake for this to be an academic exercise. We need to win and govern with authority and courage.”

Christie’s public ideological debate with Paul began last month at the governors forum when he called the Kentucky senator’s brand of libertarianism “a very dangerous thought.” Paul subsequently tweeted that Christie was merely worried about the “dangers of freedom” and things only escalated from there.