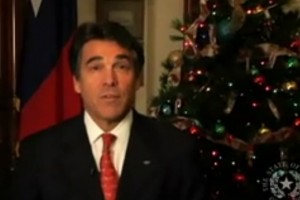 Texas Governor and fallen former presidential frontrunner Rick Perry continues to revive his campaign by picking culture war fights with President Obama, releasing an ad that decries, among other things, that ” our kids can’t openly celebrate Christmas or pray in school.”

As American Bridge PAC points out, though, Gov. Perry is a “Happy Holidays” hipster who took the “Christ” out of Christmas way before it was cool.

Perry’s ad also predictably hits President Obama on his support for gay rights, again falsely equating legal discrimination with “people of faith,” blissfully feigning ignorance of the fact that some “people of faith” once supported slavery on the same basis (including, apparently, whoever named Perry’s hunting camp). Lots of other people of faith did not.

But it’s Perry’s invocation of the War On Christmas™ that provides the entertainment value in Perry’s ad. While he tries to get in on the Yulepocalypse Now! fervor, his own past shows he was on the “Happy Holidays” team as recently as 2008…and as far back as 1992, long before anyone knew the War was coming. I guess he’s the Che Guevara of the secular liberal anti-Christmas revolution:

For shame, Rick Perry, for shame! How can we expect our kids to “openly celebrate Christmas” if you won’t even say its name? Go get him, Bill O’Reilly! Have at him, Fox and Friends! I’m just glad I could play my part in this existential struggle. “Happy Holidays” indeed!