Cindy Sheehan vs. Pat Smith: How The Media Continues To Serve As Obama’s Bodyguard

Cindy Sheehan vs. Pat Smith: How The Media Continues To Serve As Obama’s Bodyguard 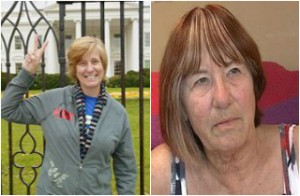 Remember Cindy Sheehan? Sheehan lost her son, Army Specialist Casey Sheehan, in the Iraq War in 2004, became a staunch anti-war activist, and an overnight celebrity. Where Sheehan went, cameras, microphones, and fawning praise followed, breathlessly capturing her every thought on President Bush and the war. The makeshift camp she set up outside of Bush’s Crawford ranch attracted scores of (other) celebrities, journalists, and even Congressmen. Sheehan’s message was not only devoutly covered but even flattering monikers were bestowed (“the Rosa Parks of the peace movement!”) and accolades were endless.

Sheehan was given any and every platform, with the media tripping over itself, for years, to report her words.

The espoused rationale for the intense coverage was, purportedly, that this grieving mother deserved an ‘explanation’ for her son’s death. This despite the fact that, as tragic as her loss was, Sheehan’s quest was not one seeking answers, nor were there any unaddressed questions or mysteries about her son’s death – her mission was a general, common one: that of an anti-war protestor.

That same media, however, who believed Sheehan was owed an explanation, is curiously dismissive of Pat Smith. Pat Smith lost her son, Information Officer Sean Smith, in the Benghazi attack last autumn. But apart from a few scattered interviews, the mainstream media has, for months, turned its back on Smith, seemingly echoing Hillary Clinton’s “What difference does it make?!” sentiment. Far from receiving praise and encouragement, Smith, in an interview with Sean Hannity on his radio program last week, emotionally noted the efforts to silence her.

But both are grieving mothers who lost a son while he served his country abroad during a controversial event. So why the difference in treatment? Why was one mother inundated with media while the other is shunned?

Quite simply, Cindy Sheehan — slamming the “illegal and immoral” war for “oil” and comparing Bush to Hitler — was Christmas morning, every morning, for the Left.

Pat Smith, on the other hand, seeks answers surrounding the Benghazi attack. She is therefore no Christmas present – rather, she is an inconvenience that must be brushed under the rug. Unlike Sheehan, who was used as a pawn to further the Left’s narrative, Smith’s quest presents a danger to the Obama Administration’s record and image.

Make no mistake: had Benghazi occurred under a Republican administration, the media would fawn over Smith with even greater adoration than that bestowed upon Sheehan. No network, no microphone, and no camera would be closed to her. But, as Benghazi is a horrific failure on the part of President Obama and then-Secretary of State Clinton, the media has gladly employed its role as guardian of the administration (who needs the Praetorian Guard of yesteryear when we have MSNBC?), ignoring the story, ignoring Smith, even ignoring its own instinctive draw and duty to explore a story where, in stark contrast to Sheehan’s, enormous mysteries and questions loom.

The same media that obsessed over whether Bush received unflattering reviews during his Texas Air National Guard service, now refuses to investigate President Obama’s errors in Benghazi – or, at the very least, question why he slumbered, resting for a Vegas fundraiser, knowing of an ongoing attack.

Consider a few of the many questions still unanswered, seven months later:

There are reportedly 30 survivors who received treatment at Walter Reed Hospital. Why the refusal to disclose any of their names? Why are official requests by several Republican senators rebuffed? Why has there not been a single shared interview with these eyewitnesses?

Why are some of the survivors reportedly afraid to speak out and why were they told to keep silent?

Why have there been no Congressional hearings with any these survivors?

What were the actual reasons behind the attack? Was this a terrorist act? By whom? Why the hesitation to label it as such?

Why was the blame initially, wrongly, placed on a YouTube video, including even the arrest of the filmmaker for good measure?

Why were warnings of an impending attack ignored?

Why were requests for additional security, by Ambassador Stevens and others, repeatedly denied?

Why were reinforcements reportedly told to stand down?

What kind of inadequate security did the compound have and why?

Most of all: Where is the transparency President Obama promised the American people? Columnist and Fox News contributor Kirsten Powers said it best last month when reflecting on the lack of information, noting: “Someone should ask Obama to define the word ‘transparency’.”

In flagrant disregard of all these questions, much of the media steadfastly ignores Benghazi, complicit in the Obama Administration’s dismissal of the fallen’s families and of the American people, who beg for answers and are met with barricades, lies, denials, and a shrug of indifference. While the First Couple celebrates in lavish White House parties, a grieving Pat Smith is silenced, left with only memories of her sole child and no answers as to why or how he perished.

Benghazi should be the Watergate of our time. Where are the Woodward and Bernsteins? Ah, but this could stain Obama and Hillary’s record? The Pulitzer can wait then. It seems, under this presidency, the media’s motto, rather than ‘leave no stone unturned,’ is ‘leave no stone uncovered.’

The American public, and Ms. Smith most of all, continues to press for answers from an indignant administration that instead betrays its sworn duty, as four corpses lay in the ground, and blithely moves on.

When discussing gun control recently, and referencing the Newtown tragedy, President Obama chided: “Shame on us if we’ve forgotten.”

Well, Mr. President, to that I would add: Shame on you if you’ve forgotten Benghazi.