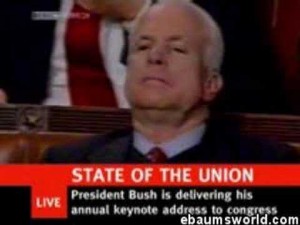 The Salahis won’t have to sneak by the secret service because, tonight, CitizenTube is bringing Obama to them.

That’s right. Tonight, CitizenTube, YouTube’s interactive political vlog, will livestream the State of the Union at 9 p.m.and, for the first time in history, make it social. When the address starts, they’ll also open a Google Moderator series that allows viewers to submit questions for Obama–either via text or video–and vote on the best. CitizenTube will then wrap the top questions in a neat little package and deliver them to President Obama. He will open and answer in a live interview at the White House next week.

If this doesn’t solidify social media’s place in more traditional news and politics, then I don’t know what will. Just this morning, an article on Politico about CNN’s evening ratings drop mentioned that the majority of Washington bureau CNN staffers questioned the journalistic integrity of Rick Sanchez, who regularly features viewer questions collected from Twitter on his show. Fine, user questions may not represent the highest levels of journalistic integrity and skill. But Obama and CitizenTube’s social foray proves that user interaction–citizen journalism, if you will–is becoming an important part of the dialogue.

It also represents a fundamental shift towards a world where everything exists on our neat little iPads (!!!). Tonight, almost every mainstream news website, White House Live on whitehouse.gov, Hulu and the White House’s iPhone app will stream the SOTU, in addition to CitizenTube. You literally do not need a TV. And consider this: n 1923, Calvin Coolidge first broadcast the SOTU over the radio; in 1947, President Truman conquered the television; in 2002, Dubya moved the political summary to the Internet, and soon, Obama will engrain it in the Web on an elevated, social playing field. If this presidential address in any way represents shifts in media consumption, then televisions may soon join radios in the dumpster. Granted, this is probably a few…you know…decades down the road. But with all the big announcements today, you’ve at least got to wonder.

Check out YOUR State of the Union tonight,  9 p.m., on CitizenTube