Nelson Shanks, who painted the portrait of former President Bill Clinton that hangs in the National Portrait Gallery, told Philadelphia Daily News he slipped a Monica Lewinsky reference into the painting.

“He’s probably the most famous liar of all time,” Shanks said. “He and his administration did some very good things, of course, but I could never get this Monica thing completely out of my mind and it is subtly incorporated in the painting.”

In the painting a shadow can be seen intruding from the left hand side; Shanks said it was the shadow of a (not the) blue dress: 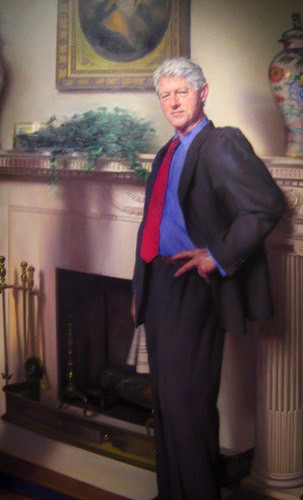 At the time of its 2006 unveiling, the painting caused a stir because Clinton was shown without his wedding band.

He claimed the Clintons “hate the portrait. They want it removed from the National Portrait Gallery.” The Daily News said the NPG had denied this.

At the time, Shanks had been mildly annoyed that Clinton didn’t have time to pose for a study, forcing the painter to rely on in-session photos. “I’ll just try to paint the man, his intelligence, his amiability and his stature, maybe paint him fairly close to humor and try to get it just right,” he told the Philadelphia Inquirer at the time.