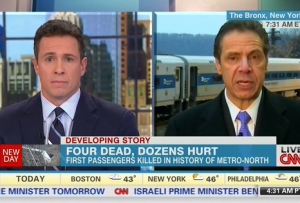 A minor controversy went off Monday morning after CNN anchor Chris Cuomo interviewed Governor Andrew Cuomo, and the two of them just happen to be brothers. It was a non-political story, but there was still some criticism that led to Cuomo the newsman responding in an e-mail to The Daily Beast.

Despite the criticism from some media outlets and on Twitter, the interview got some strong defenders in Greta Van Susteren, who wrote a post on her blog over the kerfuffle, POLITICO media reporter Dylan Byers, and Mediaite columnist Joe Concha, who wrote that the interview “concerned a tragedy, not a re-election effort or policy push” so there’s no real conflict of interest here.

And now Cuomo is defending himself, essentially rolling his eyes at the critics in an e-mail to The Daily Beast’s Lloyd Grove.

“Obviously I did the intv because it was non political, and frankly, I invite the criticism—because it exposes the hollowness of a lot of what is out there,” the 43-year-old Cuomo emailed me after absorbing the predictable reproaches from various ethics cops on Twitter and elsewhere. “Critics say my intv was no diff than any other and then criticize anyway,” he continued. “Think about that. I get the obvious suspicion, but the media has to do better than simply cater to the obvious…and pawn off negativity as a proxy for insight.”