CNN Has Banned The Term ‘Frankenstorm’ From Its Hurricane Sandy Coverage

CNN Has Banned The Term ‘Frankenstorm’ From Its Hurricane Sandy Coverage 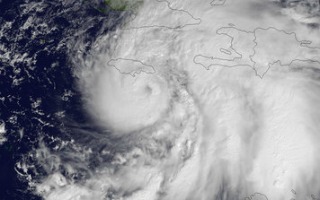 Hurricane Sandy has stood shoulder-to-shoulder with Ann Coulter, John Sununu, and Donald Trump as one of the week’s biggest stories, even earning itself the nickname “Frankenstorm” for its combination of strong winds and potential snowfall. It’s practically the J.Lo of deadly weather phenomena.

But, given that storms are serious business — particularly when, as in the case of Sandy, they result in the deaths of over two dozen people — not everyone is wild about the storm’s cutesy moniker. Enter CNN, which has barred its reporters from using the term in their coverage of the hurricane.

“Let’s not trivialize it,” said the directive, according to CNN meteorologist and severe weather expert Chad Myers.

“It’s a term that’s not appropriate for a storm that’s already killed more than 20 people,” says Myers. The directive doesn’t much affect Myers, who says he’s never used “Frankenstorm” on air; he did see a banner that deployed the term and dashed off a quick text message ordering its removal. “It’s too big of an event to make fun of it.”

While we’d argue that the Frankenstorm label isn’t so much “making fun” of the storm as it is giving it a memorable and descriptive (if overly cute) name, it probably is best that respected major news sources keep things “official.” Leave the “celebrity weather names” to us, guys. Plus, 3D Halloween kids movies only have so many title possibilities without news channels snapping them all up for themselves.