CNN Money is currently taking some heat on social media for this tweet (since deleted, but here it is for posterity): 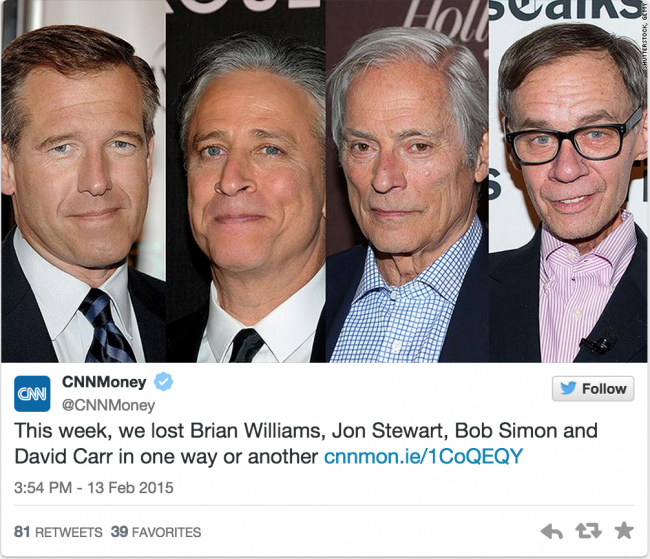 This week, we lost Brian Williams, Jon Stewart, Bob Simon and David Carr in one way or another http://t.co/tpb4CF2qhh pic.twitter.com/fRwoyiuGxT

It seemingly equates the deaths of David Carr and Bob Simon to the departures of Brian Williams and Jon Stewart from their respective shows.

Here are some of the reactions:

The day CNN’s social media intern was fired, in one way or another. http://t.co/GtJFNVuIdD

Brian didn't get "lost." RT @CNNMoney: This week, we lost Brian Williams, Jon Stewart, Bob Simon and David Carr in one way or another

.@CNNMoney How in the world do you include Williams & Stewart in a picture/story with tragic deaths of two iconic newsmen. Shame on you.

Er, I get the sentiment, but death ≠ "will no longer be on TV" @cnnmoney

CNN’s Jake Tapper even acknowledged the fair criticism of the tweet:

UPDATE — 5:05 P.M. ET: They ended up pulling the tweet and apologizing:

Our story was written from a place of deep respect and admiration for Simon and Carr. We regret the tweet, removed it & sincerely apologize.