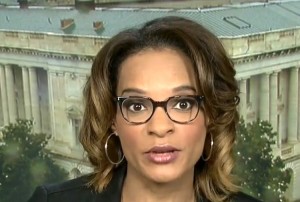 If you need more evidence of the way Donald Trump‘s presidential candidacy has distorted reality in political journalism, look no further than the aftermath of the presumptive Republican nominee’s Hillary Clinton attack speech from Wednesday. Following that speech, CNN performed a fairly exhaustive fact check on Trump’s attacks, and found 11 of the 18 claims they evaluated to be “false,” while five were rated “true,” and two others were found to be “true, but misleading.” The Clinton campaign put out its own list of “15 Biggest Lies” from the speech.

Despite all of that, Trump’s speech has generated relatively high marks from the “objective” political press, who are always impressed when he manages to read off a teleprompter and managed not to drop the n-word. On CNN’s New Day Thursday morning, though, the bar was lowered even further by CNN political reporter Nia-Malika Henderson, who told her fellow four-box denizens that it really doesn’t matter that Trump’s speech was “riddled with falsehoods”:

Cuomo: Nia-Malika, there are no facts to support the allegations against the Clintos. I mean, there’s a reason that you’re not seeing real investigations into this, but does that matter politically?

Henderson: No. I mean, I think in many ways, Donald Trump has sort of proven that we are post fact checking in many ways in this campaign. His speech yesterday was littered with falsehoods…

…Is he sort of a credible person in terms of advancing some of these ideas about Hillary Clinton, which as you said, aren’t really based in fact, but he’s a master of that. Saying oh, well, there’s questions about this and even though he can’t really prove them, he sort of raises the idea and plants the seed, and it works effectively for him.

There are two obvious fundamental problems with this analysis, the chief one being that as a reporter, it is Henderson’s job to make it matter. She’s not alone in this misunderstanding of political journalism that says the job is simply to observe the state of play, that any substantive judgment somehow constitutes a deviation from objectivity. No. If a candidate is constantly lying, your job is to constantly report that. If a speech that’s “riddled with falsehoods” is anything but a failure, it’s because journalism has failed.

But even if all you expect from political journalists is a spectator’s analysis, Henderson fails on that count, too. Trump’s campaign of lies and racist invective succeeded in a Republican primary where those qualities are features, not bugs. There is no evidence to suggest this will be politically effective in a general election, and lots of recent evidence that it isn’t.