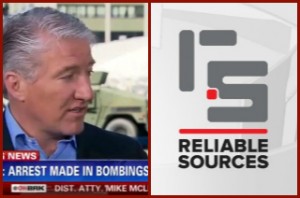 Howard Kurtz is viewed by some in media like an internal affairs officer is viewed inside a police department: A necessary part of the force, but one that also gets the least holiday greeting cards come December.

Reliable Sources—a weekly program hosted by Kurtz featuring panels and guests that analyze the media—is one watched closely by those in the industry. A majority of segments, simply due to the general nature of analysis, will skew more negative than positive. So at some point, all networks and most on-air talent will be discussed in some fashion on the show. And given the massive and fragile egos in network and cable news, it’s a good bet the reaction to what’s being said isn’t pretty.

The media never experienced more scrutiny than it has in the past week, as the Boston bombings and subsequent manhunt became the biggest story (if not the most riveting) since 9/11. A terror attack involving bombs at a major sporting event—on Patriots Day—in an iconic American city: Three killed, including an 8-year-old boy, and 170 injured, several maimed.

The public was saddened, angry, demanding…wanting answers. Why did this happen? Who did this?

From an information gathering perspective, the difference this time around (compared to 9/11) are all the different venues available to a demanding public to get those answers. Twitter, Reddit and police scanner chatter streamed over the internet…all changed the way the public got its info fix.

Early in the week, the competition was fierce to be first. But midweek when a few big outlets got a potentially huge story wrong—the arrest of a suspect—the public now had two entities to lash out at: Those responsible for the attack, and a media that was sacrificing accuracy for speed.

The most prominent outlet to report erroneously on the arrest (that didn’t happen) was CNN. The Associated Press, Boston Globe and FOX News also got it wrong, but CNN and reporter John King got the brunt of criticism because they were first in the wrong department.

Know this: CNN is also held to a higher standard because of its heavier focus on hard/straight news. So when it makes a mistake like this in front of its biggest daytime audience in years, it somehow feels bigger.

On Sunday, I was a guest on Reliable Sources and for the second time this month. Not a big deal…I’ve guested on MSNBC, CNBC, FOX and FOX Business (among many local outlets and radio shows) dozens of times. But the TV thing never gets old and therefore can still be fun: The makeup takes five years off your life, you get your (receding) hair done, meet some familiar people, and there’s always plenty of yummy carb-based food in the green room. Then you’re on national or (in my case) New York local TV for 5-30 minutes, your friends bust your chops on Facebook and in text messages, and in the end, it doesn’t take too much time out of the day.

Given the CNN blunder was a widely-discussed story in media circles and among those who follow the industry (like the millions of unique visitors who come to Mediaite each month), I wondered if Kurtz would ignore the issue, skirt it by mentioning it in passing without allowing much elaboration, or actually dive feet first into it.

Note: Kurtz will greet you at some point before the show, but doesn’t go over questions beforehand or share his perspective. It appears to all be in an effort to keep the show spontaneous, natural. If it seems rehearsed, viewers can sniff that out in the hurry. Having said that, while we’re given a heads up on general topic, details of exactly what will be discussed or when aren’t made available.

So when the show opened Sunday, it was somewhat surprising that Kurtz led with the CNN/King story, spending several minutes on what went wrong, what impact it would have on King and the network, and why CNN was singled out more than others who made the same mistake. There were plenty of other angles that could have kicked off the show (media coverage of the capture of suspect #2, initial media reaction after the bombing, expanded role of social media, etc), but the decision was made to address the elephant in the room first.

When the segment was over and we went to commercial, I thought about what other networks have the courage to put on a program like this…a show where a network calls out its own reporters and executives in such a public forum. Howard Stern’s Sirius radio show comes to mind, but given the content and forum (unregulated radio) we may be talking apples and oranges. Ultimately, most executives at other networks would forbid its brand being damaged or its credibility questioned before its own viewers, but CNN…pre-Jeff Zucker, post-Jeff Zucker…doesn’t matter…lets it all go.

In the end, the audience wants honesty, transparency. If it means challenging your own network, that doesn’t hurt the brand…it only strengthens it. Viewers know that no media outlet is infallible, and in CNN’s case, King/the network owned up to the mistake.

Kurtz knew people–particularly those in the bubble–would be watching to see how his show would handle such a delicate situation for CNN. But no punches were pulled, no stone left unturned in analyzing everything that went down during media’s most scrutinized week in 12 years.

This is unlike, say, the New York Post, which has refused to issue an apology for putting a photograph of two innocent young men on its back cover under a headline, “BAG MEN” early last week. The paper has shown zero remorse, stating that the paper never actually called said Bag Men suspects. Whatever. The implication is as indefensible as it is unsettling.

Reliable Sources is a show built on examining the media.

Kurtz could have downplayed or ignored the King story. Instead, he allowed an independent panel (Erik Wemple, Washington Post; Lauren Ashburn, Daily Beast) to bring their respective opinions and left it to the audience to decide.

The show did its job.

Just don’t expect its host to be voted “Most Popular” in a media yearbook anytime soon.