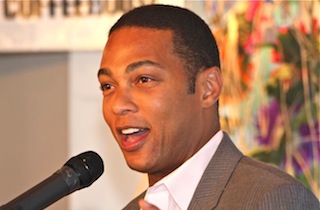 Following a government shutdown induced by an argument over the Affordable Care Act, CNN host Don Lemon asked listeners of Tom Joyner’s radio show to join him in a thirty-day regimen to become healthier as a way to better preclude dealing with the unpredictable complications of America’s health care system.

“I am so mad this morning,” Lemon began. “As I’ve been watching lawmakers over the last few weeks debate the issues that led to the shutdown—you know what that is, health care—I felt helpless and I felt betrayed. One, because of the false narrative that both sides caused this shutdown. That’s not true. It was caused by Republicans, mainly tea party Republicans.”

Though he affirmed that ObamaCare will make health care more affordable and accessible, he then advised, “The best way not to encounter America’s health care system is not to have to encounter it.”

“Today, I am making a pledge to myself and to you, and I hope you join me, to do whatever is in your control, big or small, to make your health, your life better.”

“No more vodka sodas for thirty days,” Lemon pledged, earning a “Dang!” from one of the co-hosts.

Listen to the whole segment below, via Tom Joyner: