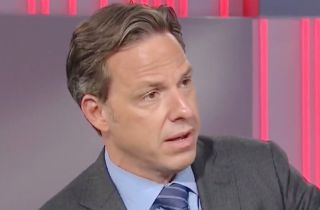 CNN’s Jake Tapper gave an interview to TheWrap where he talked about how some news organizations have been pretty virulently anti-Trump in recent days.

The Huffington Post reacted to Donald Trump‘s New Hampshire win with the front page headline “NH Goes Racist Sexist Homophobic.” The New York Daily News reacted by portraying Trump as a clown who only won thanks to his “brain-dead” zombie supporters.

Tapper told TheWrap that those are clearly “business decisions” and not journalistic ones––decisions to “get clicks or have newspapers purchased.”

There are plenty of people in the media who don’t like Trump––and Tapper himself has been pretty tough on The Donald––but he thinks at some point the anti-Trump fervor goes too far:

“I think journalistically to attack people who support a candidate is the very height of elitism. These are Americans exercising their right to vote and it’s important to go out and meet them and talk to them and find out why they’re supporting the candidates they’re supporting. It’s not my approach to journalism. My approach to journalism is to cover what’s going on and try to understand it and understand the voters and the candidates, not to mock them.”

Tapper also noted how he’s been more bullish about Trump’s chances at winning the GOP nomination than most other political analysts have been in the last few months.