Colbert: It’s Nice to Not Have to Pretend to Be a Pundit Anymore
video

Colbert: It’s Nice to Not Have to Pretend to Be a Pundit Anymore 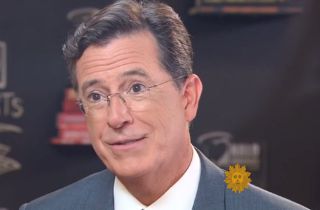 Stephen Colbert may have loved playing a character on The Colbert Report, but he admits he’s a little relieved he doesn’t have to pretend to be a political pundit anymore.

Colbert sat down for an interview with CBS’ Mo Rocca––who just happens to be one of Colbert’s former Daily Show colleagues––to preview this coming Tuesday’s Late Show debut, as well as reflect on what brought him to this point.

In a preview of their full interview tomorrow, Colbert tells Rocca he’s hoping people will quickly understand that despite his full commitment to playing a fake political pundit, his number one priority is just being funny.

“It is, I guess, flattering,” he said, “that people thought I was an actual pundit or a newsman, eventually, over the years. But it’s really nice not to have to pretend it any more!”

His goal for The Late Show is to have fun with his friends while also talking about important things happening in the world.

The full interview airs on CBS Sunday Morning tomorrow, and you can watch a preview clip below, in which Colbert talks about his better half: