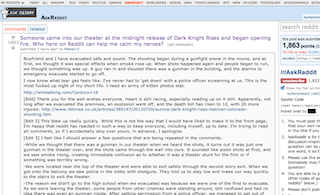 Eyewitnesses to the shooting at an Aurora, Colorado, movie theater documented the tragedy through posts on Twitter and Reddit that provide a chilling perspective to the incident.

Chayyiel Jackson, who goes by @ChayJ3 on Twitter, is one of the first Twitter users to post about the shooting according to Poynter. Jackson tweeted that he was at the theater when the shooting happened. He indicated that if he was on the other side of the front row, he would have been shot.

Zach Eastman, who goes by ‏@ZachEtake38 on Twitter, said the shooting occurred in the theater he was in. “Have just evacuated our theater in Aurora,” he tweeted. “There was a shooting in our auditorium. I am safe.”

A Reddit user with the screen name “Peener13” posted at about 4 a.m. Mountain Standard Time, saying there was a shooting. “Someone came into our theater at the midnight release of Dark Knight Rises and began opening fire. Who here on Reddit can help me calm my nerves?” the headline of the post read. The post went on to describe the events.

“The shooting began during a gunfight scene in the movie, and at first, we thought it was special effects when smoke rose up,” the post read. “When shots happened again and people began to run, we thought something was up. A guy ran in and shouted there was a gunman in the building, and the alarms to emergency evacuate started to go off.”

The Reddit user then said the shooting occurred one theater over.

“While we thought that there was a gunman in our theater when we heard the shots, it turns out it was just one gunman in the theater over, and the shots came through the wall into ours.”