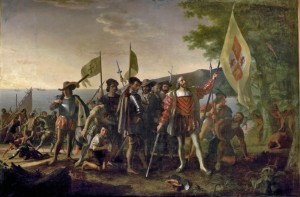 People are — and always have been — selfish jerks. That’s indisputable. It’s not worth fighting over.

Our forefathers were oppressed and were oppressors. In the quest for glory and wealth, Europeans did horrible things to those Native Americans who had the gall to get to the New World first. Once established, Americans did more horrible things to them. I don’t say this to diminish the terrible and innovative horrors – I say it to acknowledge that people from Europe and America treated people from America and Africa as no one should ever be treated.

Some see this behavior as an illness, a virus that first infected the Caribbean on October 12, 1492. To them, Columbus Day isn’t a day to celebrate the arrival of the first (non-Scandinavian) European to America – it’s an opportunity to call attention to the genocidal acts that followed when East met West. Started in Berkeley in 1992, today is also known as “Indigenous Peoples’ Day,” a day on which to celebrate the native people who first lived in America.

I appreciate the sentiment. It’s easy to elide the marginalized from our consideration of history. But the response seems knee-jerk, a yin counter to the yang implications of celebrating the man who cracked open the door of genocide. A door, let’s be honest, that would have been opened sooner or later anyway. If Columbus hadn’t discovered America, it’s safe to assume that this continent wouldn’t still today be populated by a few thousand Iroquois, Sioux and Mayans.

Columbus Day was founded not as a celebration of Christopher Columbus, but as a celebration of a group of people – Catholics. The Knights of Columbus pushed for national recognition that a Catholic was the first to land on our shores, hoping to combat a surge of anti-Catholic sentiment in the middle of the 19th Century. Catholics from Ireland, Italy, Germany and Russia were immigrating at a significant rate, and meeting the traditional American cold shoulder once onshore.

That’s why today should, instead of Columbus Day or Indigenous Peoples’ Day, be Immigration Day. A day to celebrate the American tradition of immigration, the blended and the discrete contributions of millions of Americans from thousands of national and ethnic origins. An Immigration Day holiday maintains the true spirit of Columbus Day – celebrating the contributions of one group – while respecting that America has been built by all Americans: oppressors, oppressed, and observers.

At any moment, it’s easy to forget the contributions that immigration has made to our country. America seems static – it is as it always has been. This is why the immigration of Mexicans is as frightening to some today as the immigration of the Irish was to others 150 years ago. It’s an introduction of new elements to what seems like the perfect mix. But it has always worked; it has always made us stronger.

It is true that there’s no official recognition of the native populations that were displaced – unwillingly – in the creation of our country. But the best tribute to that aspect of America’s history isn’t a day created in angry reaction to Christopher Columbus. It’s a day that respects the unique contributions of indigenous peoples and is honest about the way we built America at their expense.

America, after all, was founded with the still-not-perfected idea that every person has a voice and a role to play in contributing to our mutual success. It’s the opposite of a land that celebrates the selfish individual. In America, your success is subject to the whims of the majority. Columbus unveiled a new world. Americans made it open to everyone.

So happy Immigration Day. My French Huguenot and German and Scottish and British ancestors made me just as your ancestors and millions of immigrants made America. Immigration is America, it’s what makes our country what it is. Let’s celebrate those millions, instead of fighting over just one.