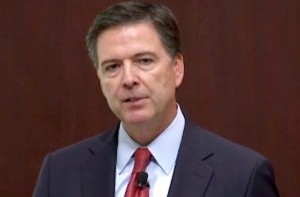 Days after CNN’s report that intel chiefs presented President-elect Donald Trump with a two-page synopsis about unverified Russian information about him, the network now reports that FBI Director James Comey personally spoke to Trump one-on-one on the matter.

According to this new CNN report, multiple U.S. officials say that the four intelligence chiefs decided Comey would be the one to “handle the sensitive information” and speak with the president-elect.

And then there’s this from ABC News, also from tonight:

Earlier today Vice President Joe Biden confirmed that he and President Obama were briefed on the claims against Trump.

@sethmeyers @latenightseth it was FUN…& superFUN to have @NBCNews today agree/verify that Trump was NOT briefed on 2 pages. Hugs to baby! https://t.co/0mQEY5fiLz

That was in reaction to an NBC report yesterday that said this:

Officials prepared a two-page summary of the memo for Trump’s briefing Friday at Trump Tower in New York. The summary was an “annex,” or addendum, included in the “supporting documents” that accompanied the classified briefing report.

While multiple officials say the summary was included in the material prepared for the briefers, the senior official told NBC News that the briefing was oral and no actual documents were left with the Trump team in New York. During the briefing, the president-elect was not briefed on the contents of the summary.

The CNN report out tonight specifically says Trump was briefed on the two-page summary:

It was FBI Director Comey in a one on one who briefed PEOTUS Trump on that synopsis, we can now report. More here –> pic.twitter.com/hklsmquhEF