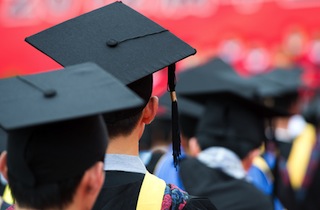 Former Princeton President William Bowen, the hastily-booked commencement speaker for Haverford College’s graduation, criticized in his address Sunday the “immature” and “arrogant” protest that led to him standing there in the first place.

Former Chancellor of U.C. Berkeley and originally-scheduled speaker Robert Birgeneau stepped aside last weekend following a protest from faculty and staff over his role in shutting down a 2011 protest on the Berkeley campus. A letter sent to Birgeneau from fifty students and professors called for him to meet nine different criteria before speaking, including issuing a public apology for the use of force, to which Birgeneau said nah.

“I am disappointed that those who wanted to criticize Birgeneau’s handling of events at Berkeley chose to send him such an intemperate list of ‘demands,'” Bowen said. “In my view, they should have encouraged him to come and engage in a genuine discussion, not to come, tail between his legs, to respond to an indictment that a self-chosen jury had reached without hearing counter-arguments.”

RELATED: Rutgers Embarrasses Self After Compelling Condi to Cancel on Commencement

“I think that Birgeneau, in turn, responded intemperately, failing to make proper allowance for the immature, and, yes, arrogant inclinations of some protestors,” Bowen continued. “Aggravated as he had every right to be, I think he should be with us today.”

Bowen also criticized the student leaders of the protest, who hailed Birgeneau’s withdrawal as a “minor victory.” “It represents nothing of the kind,” Bowen responded. “In keeping with the views of many others in higher education, I regard this outcome as a defeat, pure and simple, for Haverford – no victory for anyone who believes, as I think most of us do, in both openness to many points of view and mutual respect.”