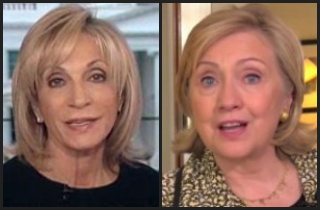 The 2016 presidential election may be a scant 819 days away, but rest assured that despite no candidate officially declaring yet–we’re already getting a nice preview of what to expect on several fronts.

One such preview came this morning on Morning Joe, as host (Joe Scarborough) and in-house guest (Andrea Mitchell) were talking ISIS, President Obama, Hillary Clinton and making many assumptions via mind-reading along the way. As you all know, Mrs. Clinton was Secretary of State during Mr. Obama’s first term. She, for example, reset relations with Russia–a strategy she still contends to this day was a success–despite the invasion of Crimea, major unrest in Ukraine and Vladimir Putin mocking the U.S. every chance he gets as we begin Cold War 2.0.

But the topic this morning involved Hillary and ISIS, the terrorist army using seized U.S. weapons and technology to carry out a murderous rampage on thousands of innocents across the Iraqi desert that now controls several cities in the country, including its second-largest (Mosul, which it captured two months ago). The President is being criticized in both conservative and even some liberal circles for underestimating the threat and the limited response thus far (watch HBO’s John Oliver’s commentary here for a fine summary)…all courtesy of his own Mission Accomplished moment in infamously calling ISIS and other Al Qaeda offshoots the Junior Varsity of Middle East High.

So given this backlash, it would also be assumed that Mrs. Clinton would also be criticized for underestimating the ISIS threat given her former powerful position in the administration. But in a crystal ball moment on MSNBC’s Morning Joe, Andrea Mitchell and Joe Scarborough sounded more like campaign operatives than objective analysts in an attempt to separate likely-candidate Clinton from Secretary of State Clinton.

“It’s almost like Hillary understands, like most foreign policy experts we have talked to over the past month understand, that ISIS is the beginning of a great unraveling of the Middle East,” Scarborough said.

“She understands it, she understood it then,” Mitchell agreed, adding later, “What Hillary Clinton is trying to do here is show the distinction,” Mitchell continued, “that she had the vision, if you will, to see that Syria was the heart of it.”

So the takeaway from this exchange is: A) The former Secretary of State understands what ISIS could do to destabilize the Middle East if it takes Baghdad and beyond (all despite a lack of evidence of said former Secretary of State attempting to do and say anything about ISIS while she had the power to do so); and B) She apparently had the vision to see the mess in Syria would spill over into vulnerable neighboring countries like Iraq, but not many speeches or interviews can be found indicating such. Except, of course, when she admitted this back in June:

““I never thought it (ISIS) was just a Syrian problem. I thought it was a regional problem. I could not have predicted, however, the extent to which ISIS could be effective in seizing cities in Iraq and trying to erase boundaries to create an Islamic state. That’s why it’s a wicked problem.”

Yup, she sure understood ISIS then, as Mitchell contended. And by the way, where was Mrs. Clinton’s leadership and initiative on this before throwing an unpopular president under the bus? Mr. Obama is the Commander-in-Chief and has the final say on these matters, yes. And to ask her to call out her boss in public isn’t rooted in reality, of course. But part of her job was to earn the respect and trust of the president she serves. If she felt we should have approached the Syrian conflict differently (via arming “moderate” rebels to squash radical armies like ISIS), then why wasn’t she able to make a more effective argument internally?

And rest assured, when it comes to that toxic election issue that is/will be Obamacare, expect to see the same kind of interference being run for the former head of Bill Clinton’s task force on universal health coverage. For those who don’t recall or were too young to care at the time, in 1993 former President Bill Clinton placed his wife in charge of what was called the Health Security Act, which he campaigned heavily on in 1992. By the following year, after Mrs. Clinton’s proposal basically got laughed out of the room by most lawmakers–even by her own party–Democratic Senate Majority Leader George Mitchell declared the bill dead. Remember, Democrats controlled all three chambers at the time, making this failure even more embarrassing (yet we barely hear about it now).

But no worries here for Clinton supporters in 2016: We’ll hear all about how much the Democratic nominee differs from the unpopular (39/55 approval/disapproval) ACA currently in place, just like we are on international matters currently imploding before our eyes. In the meantime, ask yourself this: Just how many questions were asked about universal health care and her stance/perspective on it during Hillary’s recent book/media tour? Answer: Hardly any, and none in any major interviews on the big networks.

When thinking of great Secretary of States, the first modern one to come to mind is James Baker, who earned the respect of all in Washington and especially Democrats while serving George H.W. Bush. The reason? For being clear on his worldview and America’s role in the world (Note: Bush 41 lost in 1992 not because of international decisions or policy, but due to a recession that drained his independent support, Ross Perot making it a three-way race and taking more votes away from Bush than Clinton–who won with just 43 percent of the vote–and by losing conservatives by raising taxes after promising not to do so).

The contention here is Baker would have made a fine president, but seemed more content managing behind the scenes. If Hillary’s record as Secretary of State is any indication–and even supporters find it challenging to name any big achievements or define any legacy–outside of some revisionist history providing an assist, is she really equipped with Baker’s strengths…a worldview, a doctrine, the ability to communicate effectively?

The answers to those questions are unclear.

There’s still 819 days for her to define herself (if and when she decides to run).

In the meantime, we’ll be hearing the kind of analysis like we witnessed on Morning Joe this morning:

Even when she was largely responsible for shaping it during the first two-thirds of his presidency.