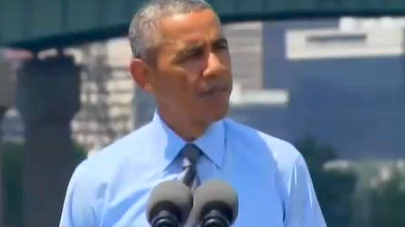 Jon Stewart was exactly right during the open of his Monday show this week: The world really has gone mad.

Actually, Monday now looks in retrospect downright tranquil compared to what we’re seeing on our television sets and on our phones this afternoon. A commercial airliner with 295 people on board — including reportedly 23 Americans — are killed after a plane is shot down in Ukraine. Who exactly is responsible (pro-Russian separatists are suspected) has not been confirmed. More importantly, the State Department hasn’t confirmed any Americans were on the flight.

As if this wasn’t enough, a few hours later, reports of an Israeli ground offensive being launched in Gaza broke as well. A chaotic day in an already much-heavier-than-usual month for news in the middle of summer.

With every story, particularly the big ones, there’s always a political element to it when it comes to the Commander-In-Chief. What’s his reaction? How is he leading in a difficult time? We saw the analysis after 9/11 with former President George W. Bush… who was criticized in some circles for being too passive while reading to school children during a trip to Florida that morning as the attacks were initially unfolding. We heard the same kind of criticism after Hurricane Katrina.

President Obama has faced the same kind of criticism in regards to his reaction to big events as well. But in Mr. Obama’s case, there’s an unsettling and dumbfounding pattern that has clearly emerged: The need to attend fundraisers as important events–the kind of events that call for the President to return to the White House Situation Room for monitoring and assessment of said events while being debriefed by military brass and talking with our allies, including Israel–unfold in real time. But as we’re seeing here in New York right now, the President is headlining the first of two fundraisers to take on the real enemy to America’s interests:

As we were told during the 2008 campaign, Vice President Joe Biden is on the president’s team primarily for his foreign policy experience. Surely he’s in Washington talking with our allies and getting debriefed on Ukraine and Gaza, right? Except he’s not. Instead, Mr. Biden — two hours after the news out of Ukraine broke and Gaza was still unfolding — delivered a speech at the Netroots Nation Conference in Detroit, which is the largest gathering of the year of progressive activists and leaders. The VP reportedly touched on Ukraine for less than one minute before diving into his remarks on beating the GOP in November.

Add it all up, and one thing is clear: nobody at the top is home.

And for no good reason whatsoever.

This isn’t the first time we’ve seen this unexplainable, embarrassing reaction from the president to events like this. Mr. Obama flew to Las Vegas the morning after the Benghazi terror attack. Did another fundraiser as Russia first invaded Crimea. Followed suit after the VA Scandal exploded by doing two more fundraisers in Chicago. And just last week, he wouldn’t visit the border while in Texas during that “humanitarian crisis” (his words) in favor of doing two more fundraisers in the same state…a move even some fellow Democrats and liberal media were left scratching their heads over.

But today really is the low point. Look — nobody is saying the president…any president — shouldn’t be allowed to fundraise to help his own party, particularly in an election year with the midterms coming up. Mr. Obama may be unpopular among a majority of Americans right now, but he still has the ability to raise cash. But to do 393 fundraisers — that’s the number reported in Wednesday’s Washington Post — in six years is not only ridiculous, it’s almost cheesy.

To that end, he cannot and should not be in Manhattan right now given everything that is happening in the world. Once again, the optics are just so poor. The Commander-in-Chief looks like he’s completely detached, completely devoid of the ability to prioritize.

But even worse, by not postponing his fundraisers on a day where the world really has gone mad, he now — amazingly — looks like he just doesn’t give a damn.