Congressional Black Caucus Won’t Meet Trump: ‘No One Wants to be a Co-Star on the Reality Show’

Congressional Black Caucus Won’t Meet Trump: ‘No One Wants to be a Co-Star on the Reality Show’ 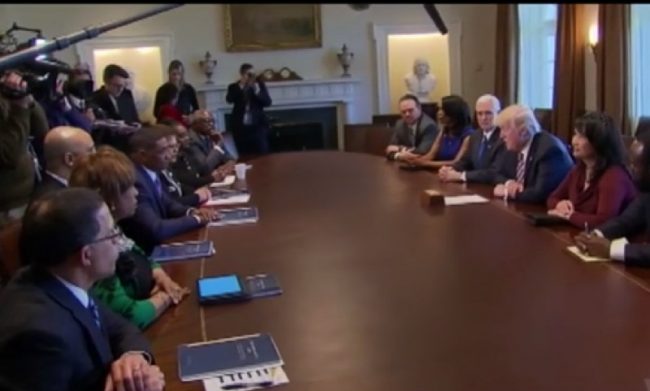 Three months after their first meeting with President Donald Trump and a couple of weeks after receiving an invitation to meet again, the Congressional Black Caucus has rejected a meeting with the president.

Per Politico’s sources, the CBC is citing Trump’s lack of action to address the caucus’s priorities that were laid out during the first meeting. Also, the lawmakers are concerned that the president will just use the whole thing as a photo-op, with one aide saying, “No one wants to be a co-star on the reality show.”

Another thing that seems to be a point of contention is — no joke — the way White House aide and ex-reality TV star Omarosa Manigault signs her letters.

“As requested by the president, we would like to schedule a follow-up meeting with the entire membership of the Congressional Black Caucus to discuss issues pertinent to your members,” Manigault wrote in the invitation, obtained by POLITICO.

But multiple CBC members said they were put off that she signed the invitation as “the Honorable Omarosa Manigault,” saying she hasn’t earned that title nor has she helped raise the profile of CBC issues within the White House as promised.

The ex-Apprentice star was hired by Trump to be a presidential assistant and director of communications for the Office of Public Liaison. She’s apparently presented herself as the “unofficial liaison” between Trump and the CBC. Since entering the White House, Manigault perhaps has garnered her most press by getting into a heated feud with reporter April Ryan.

Speaking of Ryan and the Congressional Black Caucus, back in February during a wild press conference, President Donald Trump asked the reporter of color if she was “friends” with the CBC and if she could set up a White House meeting with them.