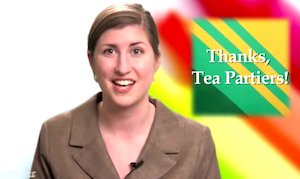 Earlier this week, a video made by the sketch comedy group and political humorists The Full Ginsburg began getting big hits on the internet. The video depicts an actress, portraying the CEO of Crayola, thanking the Tea Party movement for boosting crayon sales by using them to make their protest signs. While the video does present the same old argument that Tea Partiers are stupid and racist, the premise is clever and the whole thing is pretty darn funny. However, Crayola’s parent company, Hallmark Cards, has gotten YouTube to remove the video, most likely doing so because of a boycott being organized by the conservative blog iOwntheWorld.com. This proves that the Tea Partiers may be smarter than the comedians assumed. Some of them, though, are just really, really bad at taking a joke.

When the video was removed, the comedian blog The Apiary got in contact with Eric Cunningham, a member of Full Ginsburg. Cunningham pointed the blame to iOwntheWorld and, sure enough, the site had posted numerous letters that they had received from the real Crayola after asking all of their readers to write in with their complaints. One of the letters reads as follows:

“Thank you for your email.
We appreciate you expressing your concern that Crayola may have been involved in the making of a parody-type video clip about recent political activities. The video depicts a spokeswoman acting as the CEO of Crayola, the Crayola logo and products, as well as both verbal and visual messages that were not authorized by Crayola.

We appreciate your contact and hope we have restored your confidence in the Crayola brand. If additional assistance is needed, you may reach us by telephone at (800) 272-9652 weekdays between 9 AM and 4 PM Eastern Time or e-mail by visiting Crayola.com.

This, however, was not enough for the blog who continued their crusade until Hallmark got YouTube to remove the video. Later yesterday, they posted this message after the parody was pulled:

“But as I said, having the video pulled from YouTube is not enough. These filmmakers tainted the Crayola name. I’m not so sure I feel the same about Crayola anymore. A have a Pavlovian response to Crayola; I hear Crayola and I feel as if I’m being hated and my beliefs besmirched and my way of life ridiculed. I don’t think I can bring myself to buy a Crayola product anymore, or a Hallmark card – unless of course I hear that they are suing these filmmakers. Only then will I be fully confident that they never had anything to do with this, and they are serious about restoring their good name.”

Wow, that certainly sounds like a stick in the mud response. Especially coming from a site that describes itself as “a consortium of independent creative thinkers producing political satire, humor, cartoons, illustrations, videos, parody and more.” How does a site that claims to employ political satire, not understand the obvious parody in the Crayola video? Well, they actually do. As Cunningham alleges in the Apiary piece, it appears that iOwntheWorld actually just pretended to think that Crayola had a hand in the video so that the company would be frightened into taking action. It was a pretty smart plan and one that clearly worked for them. However, it is completely unethical, especially coming from people who claim to be satirists.

Look, you may like the sketch and you may not, but you can’t try to silence comedians just because you don’t like what they have to say. Didn’t this blog learn anything from the South Park fiasco last week? Sure, it’s an enormous stretch to compare these guys to terrorists who made death threats. They threatened boycott though, which is the business equivalent of threatening murder. Are liberals going to have to whine to the Communist Party so that that Victoria Jackson song gets taken offline?

Obviously these people aren’t going to learn to “all get along” any time soon. You’d think though, that they could learn to grow a thicker skin.

The Crayola video is (for the moment, at least) still being hosted on Funny or Die. We’ve also got it for your viewing pleasure below.

UPDATE: Eric Cunningham contacted us to let us know that the video had more than 80,000 views when it was removed from YouTube. We wrote him back to see if he had anything else to say on the topic.

“I mean, it’s all just weird.
Obviously Crayola’s always gonna be awesome in our books, it’s just a pain that these tea partiers tried to force the company to act by using a boycott. …Over some internet video.”

We would like to point out that the blog in question obviously doesn’t represent all of the Tea Party and, personally, this writer finds it more interesting to view this story as a battle between satirists more than a right vs. left issue.
iOwntheWorld also responded to this post with one of their own, entitled “They Don’t Get It, Do They?”