Conservative Media Created Cliven Bundy, Now They Must Destroy Him

Conservative Media Created Cliven Bundy, Now They Must Destroy Him 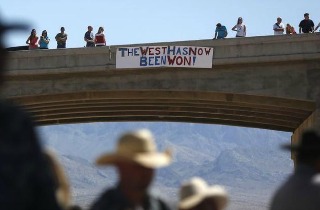 It is hard to have much sympathy for the conservative media outlets that elevated Nevada rancher Cliven Bundy, rather than the legitimate concerns over the federal government’s approach to land management in the West, to hero status. Bundy was never a figure worthy of much veneration, much less pity. But more than a handful of conservative outlets, fueled by antipathy toward the administration and angered by the election year-fueled rhetorical overreach of lawmakers like Sen. Harry Reid (D-NV), took an imprudent course by crafting a personality cult around delinquency.

Not every conservative media outlet fell for Bundy’s carny act. As the facts of the Bureau of Land Management’s case against Bundy were examined, and the various provocations and irresponsible actions in which Bundy engaged in order to justify his feud were exposed, some conservatives devoted their analytical skills to chastising their ideological compatriots for lionizing a reprobate. The Blaze’s Becket Adams has spent the better part of the last two weeks demolishing the various conspiracies that conservatives erected in the effort to legitimize the illegitimate.

But Adams is the exception to the rule; too many conservatives were eager to embrace the enemy of their enemy. Most overlooked his debatable claim to ownership of federal lands, deemphasized the numerous court rulings against him, and gave the BLM no credit for their flexibility in the enforcement of the requisitioning of Bundy’s cattle. They saw only the government’s armed intimidation and use of extraordinary, and distasteful, tactics against Bundy. But just because the instruments of government enforcement can resemble an occupying force does not justify an insurgency.

The racist comments which appeared in the New York Times should disabuse conservatives of the notion that his is a winning cause.

“I want to tell you one more thing I know about the Negro,” Bundy ill-advisedly began. “They abort their young children, they put their young men in jail, because they never learned how to pick cotton. And I’ve often wondered, are they better off as slaves, picking cotton and having a family life and doing things, or are they better off under government subsidy? They didn’t get no more freedom. They got less freedom.”

These repulsive comments not only discredit Bundy but also provide opponents of the conservative movement with powerful ammunition to use against the conservative commentators and broadcasters who elevated him to a place of undue adoration. Liberal broadcasters will use these comments against Bundy’s defenders until they lose all their potency, and probably for a few more years after that.

In the Obama era, a number of left-leaning media outlets have created an industry from whole cloth consisting entirely of decoding supposedly coded racism emanating from the right. The least sophisticated of these professional racism divining rods have dubbed everything form the word “golf” to the word “Obama” as “dog whistles” which are supposedly designed to activate racist sleeper cells. Nakedly backwards, openly white supremacist statements like Bundy’s threaten to put these entrepreneurial racism detectors out of business.

But Bundy’s comments do serious harm to the conservative brand. They confirm the worst paranoid fantasies of those predisposed to mistrust conservative broadcasters and pundits. One would think that this self-evident threat to the right-leaning media’s credibility would prompt the conservative commentariat to immediately dismiss Bundy and his dubious gripe against the BLM. But old habits die hard.

“I was alerted to this story this evening in the NYT on rancher Cliven Bundy which featured a quote I was told was racist, and therefor [sic] I should apologize for ever criticizing the Bureau of Land Management’s handling of this and other situations,” a defiant Dana Loesch wrote on Thursday. “If Bundy is a racist, that is awful, but what exactly does that have to do with the BLM? I’ve been saying for weeks that this isn’t about one rancher. It’s about government overreach.”

And many conservatives have, in fact, used Bundy’s claims as a launching pad to investigate the BLM’s abuse of land management in the Southwest. Still others have called attention to the imbalance of federally owned land in the West versus the South and Northeast. But that cause is now tainted by the outlaw and antediluvian racist who first brought it to light.

Conservatives cannot now defend Bundy’s cause while subtly and defensively denouncing his comments. A full-throated condemnation of Bundy is due. The conservative media’s crusade against the BLM’s overreach may be forever stained as a result of the figure they elevated as its champion. If those aligned with the GOP continue to entertain Bundy as a legitimate political actor, it will only further alienate minorities – without whom, conservatives will have a difficult time recapturing control of the White House.

So what is the bigger prize, conservatives? Political power and legitimacy conferred by majorities at the ballot box, or your pride which is now tied up with an individual unambiguously unsuited to the role of martyr. Do not take too long to answer.