Conservatives Are Quietly Giving Up on Repealing Obamacare

Conservatives Are Quietly Giving Up on Repealing Obamacare 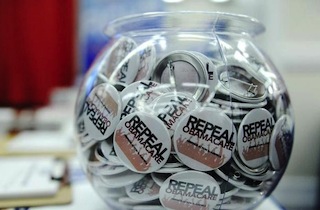 Talking Points Memo’s Sahil Kapur finds an anonymous GOP aide to break down the problem Republicans have been having with finding an alternative to the Affordable Care Act:

In other words, the alternative to Obamacare is Obamacare.

This comes on the heels of several conservative commentators conceding that Obamacare’s attainment of the 7 million enrollee milestone meant that it was structurally viable. The law’s repeal was supposed to have been auto-induced after its public collapse; but if the ACA is self-sustaining, repeal becomes a quixotic charge to snatch health care from millions of people just as they’d finally gotten it. AEI’s James Pethokoukis rounds it up:

Even if Republicans gain control of the White House and Congress, there are limitations to what a GOP president would do. For instance, maybe President Rand Paul would decide to disallow the federal health exchange from paying premium credits to 10 million Americans. As Capretta puts it, “A reversal of this kind would be politically tumultuous, to put it mildly.” Adds Ponnuru: “It seems unlikely that Congress would pass legislation to strip coverage from millions of people.”

Pethokoukis cites Avik Roy, who compares the future of the health care battle to that over public education, in which its universality is never questioned, and reforms vie within its framework rather than against it. Roy’s own plan “works off the status quo,” Pehtokoukis notes, “rather than attempting to scrap the status quo.” That status quo, it now goes without saying, is Obamacare.