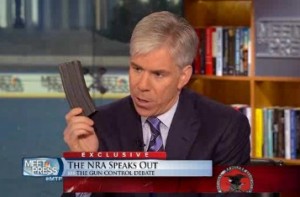 On Sunday morning’s Meet The Press, host and moderator David Gregory performed an unexpected feat of journalistic heroism, exposing National Rifle Association executive Wayne LaPierre‘s logically bereft opposition to any and all regulation of firearms. While they spent the week blaming everything but guns and gun laws for the horrific shooting at Sandy Hook Elementary School, the conservative media suddenly found concern for bans on high-capacity ammunition clips when they thought, maybe, that David Gregory had violated one.

This is that “perspective” thing that Bob Costas was talking about. After concluding that the cause of the sickening mass shooting in Newtown, Connecticut was the fault of the mental illness that we sill don’t know the shooter had, or the videogames we don’t really know if he played, or the movies American Psycho and Natural Born Killers that we don’t know if he saw, or the God that we’re pretty sure doesn’t abandon children because of psychiatry and gays, and not the portable arsenal that we know the shooter had, the conservative media greeted Wayne LaPierre’s utter failure to explain that case by marshaling gun control laws against David Gregory.

Apparently, during his tour de force grilling of LaPierre, Gregory, at one point, held up a visual aid: an example of a 30-round magazine. It was the most powerful, most devastating part of the interview, because when Gregory asked Wayne LaPierre, over and over, to explain why taking high-capacity clips out of killers’ hands wouldn’t have reduced the number of children killed at Sandy Hook Elementary, or in any mass shooting, here were LaPierre’s responses: (emphasis mine)

What little argument LaPierre offered, that existing bans and past bans hadn’t worked, and that there are too many of these clips on the market already, cut in favor of stricter laws, not more lenient ones, and not the status quo. We can ban these clips, and round them up, no matter how many times Wayne LaPierre keeps saying it won’t work because he thinks it won’t work. It worked pretty well with machine guns.

Gregory’s aggressive questioning then forced LaPierre to try and change the subject, and revealed his sickening bad faith in the face of tragedy, for all to see. He told Gregory “. I’ll tell you what would work. We have a mental health system in this country that has completely and totally collapsed. We have no national database of these lunatics.”

LaPierre had no choice but to dart away again. “We… we don’t prosecute anybody under the federal gun laws right now,” he sputtered.

He shot back at LaPierre with a pitch-perfect summation. “But that’s not a response to my question, Mr. LaPierre.” Gregory began. “What I hear you saying is, ‘Well, you can’t do anything about the high capacity ammunition magazines because it simply won’t work,’ yet you’re proposing things that you don’t know will completely work. But you’re into the art of the possible, because your standard is anything that has a chance of work we ought to try, except when it has to do with guns or ammunition. Don’t you see that people see that as a complete dodge?”

The entire interview was like that, and in exposing fallacies that the media has allowed to thrive in the name of false “balance,” David Gregory fulfilled his duty to serve the public interest in a way that is rarely seen, or even possible, and every bad thing that anyone has ever said about David Gregory needs to be taken back. Interviews like this save lives.

But the mere thought of a world in which mass murderers are unable to get their hands on rapid-fire arsenals, if it means that gun owners have to reload more often when they’re taking target practice, is so frightening to some in the conservative media that they invoke the very gun laws that they oppose in order to somehow discredit David Gregory:

After a series of LaPierre’s answers appeared to frustrate him, Gregory lashed out at LaPierre and held up a high-capacity ammunition clip

Since David Gregory works for NBC Universal, there’s every chance that he has legal access to film and television props, but that’s not really the point. This is the absurd conclusion to some conservatives’ reactions to this shooting, that the death-dealing instruments used in these mass murders aren’t the problem, unless David Gregory is holding one while taking a “very aggressive posture” toward a proponent of those same instruments. Most of us would rather see that clip in David Gregory’s hands than the next mass murderer’s.

Here’s the video of David Gregory’s interview with Wayne LaPierre, from NBC News’ Meet The Press: