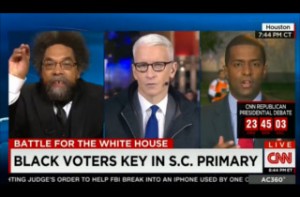 Speaking to Anderson Cooper Wednesday night, Professor Cornel West spoke out in support of Bernie Sanders and characterized Hillary Clinton‘s enduring popularity with African-Americans as an issue of “a neo-political, black political class that confuses the gravy train with the freedom train.”

West explained that Sanders’s social progressivism should have made him a much more attractive candidate than Clinton, whom he blasted for her ties to Wall Street, her husband’s policies that led to mass incarceration of African-Americans, her connections to lobbyists for private prisons, and remarks she made in 1996, in which she referred to urban youth as “super-predators” with “no conscience and no empathy.”

“I think part of it is we’re in a paradox,” West told Cooper. “Black people have been the most progressive group when it comes to social justice. No doubt Bernie Sanders is the most progressive when it comes to social justice. He’s not tied to Wall Street in any way. […] And he doesn’t use the language of our dear sister Hillary Clinton when she talks about young black youth as super-predators.”

He called Clinton a “Wall Street Democrat.” Sanders, he said, had pledged to decrease mass incarceration and was “anti-Wall Street,” and for those reasons poor, working-class, and middle-class black voters should support him. “We can understand the black elites sometimes pulling back,” he said, because Sanders was passionate “about accountability in terms of elites no matter what color. That’s why I’m with him, my brother.”

CNN contributor Bakari Sellers countered that Sanders was, like Clinton, encumbered by his past stance as a “tough on crime” legislator, and was limited by being the “proverbial one-issue candidate.” Clinton had a more nuanced understanding of the interconnectivity of different systems of oppression, economic inequality, and environmental injustice, he said. Conversely, Sanders was limited to the contours of his income inequality stump speech, which was why he was struggling to win African-American support.