Coulter To Geraldo: We Should Have Police Surveillance In Every Mosque — ‘It’s Not A Private Relationship’
audio

Coulter To Geraldo: We Should Have Police Surveillance In Every Mosque — ‘It’s Not A Private Relationship’ 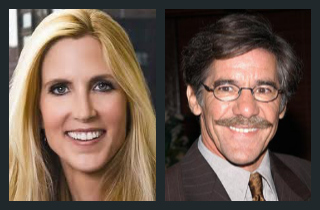 Agreeing with co-panelist Alan Dershowitz‘s suggestion that “surveillance is a very good thing” and that “we should learn to live with video cameras” because a mosque, church, or synagogue are “not a private place,” Coulter told Rivera:

But, see, that’s the thing: a mosque is a private institution. The Lord & Taylor surveillance camera that at least partially helped identify the Boston suspects was installed by a private business that decided to install the cameras for security reasons. If a mosque or church or synagogue decide to install cameras for their own security’s sake, then fine — as private institutions, they have the right to do so and their members can choose not to attend if they don’t like the tape rolling.

But private institutions also have the right not to install cameras, and so the two Geraldo guests’ proposal rings ever-so-slightly in the direction of mandating that surveillance be installed where necessary.

And as for Coulter’s and Dershowitz’s logic that “anywhere an undercover cop can be” is where we should put cameras? That’s a seriously dangerous suggestion. An undercover cop can go to some Tea Party gathering at a local VFW. Would Coulter be okay with government surveilling that — you know, just in case?

And would Dershowitz really be okay with government forcing synagogues to install surveillance? Or did he just throw that suggestion out there to mitigate his specific desire that we have the cameras rolling on all mosques?

“But any place you could have a cop. We don’t have the manpower nor the desire or the money to have half the country be undercover cops watching the other half. But we can put a lot video cameras around.”

“It’s not as if all of these tapes are going to be watched by someone anyway. Otherwise that’s all the police would be doing, and you’d have to quadruple the size of the police. It’s only after an event happens that they go back and play the tapes back. And it’s giving you the eyes of an imaginary cop.”

Listen below, via WABC: