Counter-Point: Can We Stop Focusing On Whether Or Not Herman Cain’s Seen His Wife?

Counter-Point: Can We Stop Focusing On Whether Or Not Herman Cain’s Seen His Wife? 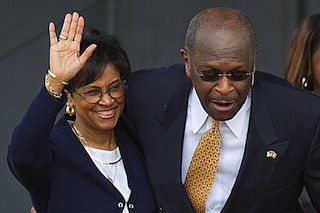 Recently, following another affair allegation, Herman Cain has been saying that he won’t be done “re-assessing” his presidential campaign until a few days for now. He’s clarified this statement, saying that he’s waiting for a chance to speak to his wife in person. A number of news outlets, including this very one, have rushed to point out that this means he hasn’t yet seen her since the most recent scandal, implying that this is weird. A number of media outlets (Politico, MSNBC, etc.) have covered Cain’s quote similarly to the way we did here, by focusing on the fact that Cain hasn’t seen his wife in person recently. I have to respectfully disagree with our own James Crugnale that there’s anything unusual about that. Since the Mediaite offices, like the comments section, is a hot bed of respectful disagreement (you should hear the names we call each other!), I’m going to step in here with my two cents.

Both in Crugnale’s article and the Politico one which he linked to, the fact that Cain hadn’t met with his wife was the basis of the headline. There’s a clear implication in this choice, a subtext which James spelled out in his column:

“How can Cain continue to go on campaigning during this public relations nightmare? With all of the numerous phone call logs between the former Godfather Pizza CEO and Ginger White (61 calls/texts, including one from 4 in the morning!) and the flirty book autograph, it seems as if Cain should have suspended his campaign and immediately gone home to his wife to settle this matter.”

The implication in the focus on this story element is that Cain is a bad husband or that there might be some rift growing between the couple.

RELATED: Rick Santorum Says That He Is Praying For Herman Cain

Obviously, any story involving public figures and accusations of infidelity are going to arouse a certain soap opera-esque atmosphere, but these stories and headlines are saying something that we just don’t know is true. You may feel that Cain should return home to be with his wife right now but, people should realize that, when they say that, they might as well cancel his campaign entirely (a decision he claims he hasn’t made yet).

Presidential campaigns are hard. A candidate doesn’t get to see his or her family for days or weeks at a time. That’s just the way it is. If Cain is seriously still campaigning, he needs to be travelling back and forth through all the key primary states. Doing anything else would be suicide.

Now, some would argue that these allegations are so serious that he should at least take a break. However, you have to remember that the Cain sex scandal has been ongoing for weeks now. New allegations keep popping up. If he went home for each one, he’d basically have skipped all of November. A candidate can’t do that.

So, for the rest of the day, can we stop focusing on the fact that Cain hasn’t been back to his house? That’s not the story here. The story is that one of the GOP front runners may have to drop out because his campaign has been beset by stories of his own possible personal indiscretions. Him not going home is not proof that he and his wife are fighting and it’s not proof that the affair claims are true. It’s not proof of anything. It’s just logistics.