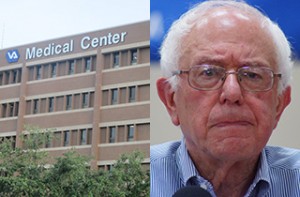 Sanders was chairman of the Veteran Affairs committee in 2014, during the height of the Veterans Health Administration scandal. When asked at the debate about his lack of urgency in handling the crisis, Sanders said he passed “a $15 billion piece of legislation which brought in many, many new doctors and nurses into the VA, so that veterans in this country could get the healthcare when they needed it and not be on long waiting lines.”

“As a result of that legislation,” Sanders continues, “we went further than anytime in recent history in improving healthcare for the men and women in this country who out their lives on the line to defend this country.”

Some groups, like the Iraq and Afghanistan Veterans of America (IAVA), say Sanders failed to do enough for struggling veterans who faced months-long wait times while attempting to receive care. Paul Rieckhoff, CEO of IAVA told CNN, “For far too long he was apologizing for the VA. He was refusing to acknowledge the severity. He was positioning it as a smaller issue than it was while veterans were dying waiting for care.”

The long wait times and subsequent cover-ups on behalf of the VA prompted several investigations into the administrative backlog; at the VA medical center in Pheonix, Ariz., “official data showed they waited an average of 24 days for an appointment. In reality, the average wait was 115 days.”

Still, Sanders isn’t facing a veteran crisis just yet. While the presidential candidate famously sought a Conscientious Objector exemption for the Vietnam War and voted against the Iraq War in 2002, some veterans think Sanders’ progressive policies mirror the reforms needed for veterans. As Louis Celli, National Director Veterans Affairs and Rehabilitation at The American Legion asked the Boston Globe, “who better than a socialist to advocate for veterans’ health care?”