Cruz: Every Time Trump’s Poll Numbers Drop, He ‘Gets Angrier and Angrier’
audio

Cruz: Every Time Trump’s Poll Numbers Drop, He ‘Gets Angrier and Angrier’ 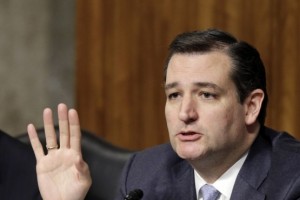 He may not respond in kind, but Ted Cruz has noticed that Donald Trump is getting nastier the more desperate he becomes.

As their conflict heats up in the weeks before Iowans cast the first votes of 2016, the Texas senator has resisted sparring with Trump directly, preferring to coyly answer insults with YouTube videos, and punting their unruly dispute over to the ballot box so as to “let the voters decide.”

While campaigning in New Hampshire Monday, Cruz gave an interview to conservative radio host Jeffrey Kuhner, in which Trump — his petty insults and conservative bonafides — dominated the conversation.

Kuhner: [Trump is] attacking you for your financial disclosures, saying you pretend to be Robin Hood, but, in fact, you’ve been taking loans from Goldman Sachs, from Citibank. He says, basically, you’re bought and paid for. People give you money, you’ll say what — anything they want to say. Are you nasty? Are you polarizing? And let me ask you this: Are you on the take?

Cruz: […] Listen you’re right. Donald seems very rattled right now. He’s been launching an awful lot of attacks in the last couple of days. And, you know, it seems every time his poll numbers go down, he gets angrier and angrier. He lashes out. And, you know, he’s entitled to make his own decisions about how to conduct his campaign. And if he wants to engage in insults, that’s fine. I have no intention of responding in kind. I like Donald Trump. I respect Donald Trump. And I don’t intend to engage in a food fight or personal insults.

While he hesitated to call Trump out for his behavior, he did attack him on his record: He cited the real estate mogul’s support of the TARP bailout and the president’s stimulus plan, his past support for single-payer healthcare, and his history “of standing with Wall Street and the giant banks.”

“You’ve basically said it without saying it,” Kuhner said, wrapping up the interview. “Are you essentially saying that Trump is a fraud and a hypocrite?”

“Well those are your words, Jeff,” Cruz said.