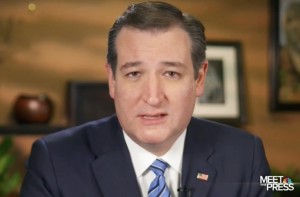 Ted Cruz got some online blowback today for a statement after Brussels saying that law enforcement should “patrol and secure Muslim neighborhoods.” Earlier in the day, Cruz declared that the horrible terrorist attack shows “Radical Islam is at war with us.”

He released a lengthier statement making the same point, including criticizing President Obama for refusing to say “radical Islamic terrorism” out of PC concerns. But in addition to talking about border security and fighting ISIS, Cruz also said this:

Our European allies are now seeing what comes of a toxic mix of migrants who have been infiltrated by terrorists and isolated, radical Muslim neighborhoods.

We will do what we can to help them fight this scourge, and redouble our efforts to make sure it does not happen here. We need to immediately halt the flow of refugees from countries with a significant al Qaida or ISIS presence. We need to empower law enforcement to patrol and secure Muslim neighborhoods before they become radicalized.

That immediately set off quite a lot of people. A spokesman for CAIR told The Washington Post, “It’s really beyond belief that you have one of the leading presidential candidates calling for law enforcement to target religious communities totally based on the fact that they are of a particular faith. In normal times, this would be the sort of thing that would disqualify someone from running for dogcatcher, much less president of the United States.”

Bernie Sanders and John Kasich even condemned his proposal:

Sanders on Cruz: We are fighting a terrorist organization, a barbaric org that is killing innocent people. We are not fighting a religion

More Sanders on Cruz "patrol": That would be unconstitutional, it would be wrong.

Kasich on Cruz patrols: "In our country, we don't want to create divisions, where we say you're a Muslim, we want to keep an eye on you"

Plenty of people on Twitter raised their eyebrows at Cruz too:

By default, I'm basically a Cruz guy now. And I agree with him a lot in many policy areas. But the Gaffney pick, and the "patrols"–not good

Ted Cruz has had that "we need to patrol Muslim neighborhoods" statement saved on his desktop for months with a bunch of TKs and TBDs in it.

Reminder: Ted Cruz is a carnival barker wannabe televangelist who cares about only one religion’s liberties. https://t.co/6s1eZpAowL

What attributes would a Cruz administration use to determine if a neighborhood was sufficiently Muslim to "patrol and secure"?

What “Muslim neighborhoods” does Ted Cruz want to put under surveillance exactly? Can he name a few?

Next interview w/Cruz needs to ask what empowering police to "patrol and secure Muslim neighborhoods" means for say, Dearborn, under his WH

UPDATE –– 3:04 pm EST: The Cruz campaign released a statement on the blowback to the candidate’s comments, insisting he won’t be driven by political correctness: