Cubs and Indians Fans on Twitter Are United on One Thing: They Think Joe Buck Has it in For Their Team

Cubs and Indians Fans on Twitter Are United on One Thing: They Think Joe Buck Has it in For Their Team 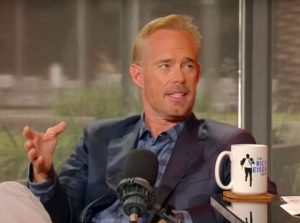 Chicago Cubs fans and Cleveland Indians fans haven’t agreed on much in the Twittersphere, as their teams have battled in the Fall Classic for the past eight days. But there is one thing on which the verdict seems to be unanimous: Joe Buck hates their team.

The FOX play-by-play announcer is the son of legendary St. Louis Cardinals broadcaster Jack Buck. The Cardinals are, of course, the Cubs’ bitter rival. And on that basis, many Cubs fans think that Joe Buck is in the tank for the Indians.

I can’t stand Joe Buck, he’s done nothing but ramble about the Indians the whole series… he wants them to win so bad??

@fredonair omg yes Joe Buck is so biased for the Indians! Can’t stand him

Should we not even play a game 7 tomorrow? According to Joe Buck, the Indians bullpen is so loaded, there’s no point. #Cubs #WorldSeries

Could someone tell Joe Buck that the #Cubs are playing the #Indians and not the #Cardinals? #WorldSeries

But many Indians fans on social media disagree, and think Buck is pulling for the Cubs:

Joe Buck sounds like a local announcer for the Cubs.. How FOX let him telecast this game is beyond me

Let’s check in on the Joe Buck decibel level after that 3-run first by the Cubs pic.twitter.com/X8tyrh8gnJ

Joe Buck couldn’t be less enthusiastic about the @Indians win in comparison to the @cubs win on Weds. Shameful. Pathetic and transparent.

Joe Buck if the Cubs complete the comeback tomorrow… pic.twitter.com/4j9jH2GMOr

Joe Buck doesn’t think the Indians will come back? #CubsBias

One Indians fan, poking fun at what they deem to be Buck’s love of Cubs slugger Kyle Schwarber, even created a Buck-Schwarber wedding registry.

No matter what happens in tonight’s historic Game 7, it’s quite likely one fan base will appreciate the commentary a little more than the other.